Congress rejected a plan by the U.S. Air Force on Dec. 11 to expand a sprawling bombing range farther into the Desert National Wildlife Refuge, a move that would have exposed hundreds of thousands of acres of culturally and ecologically significant land to damage while reducing access for the Indigenous Southern Paiute people.

Greg Anderson, vice chair of the Moapa Band of Paiutes, told Nevada Current after the House vote that it was a victorious day and the Moapa were “overwhelmed with gratitude” at the outcome. 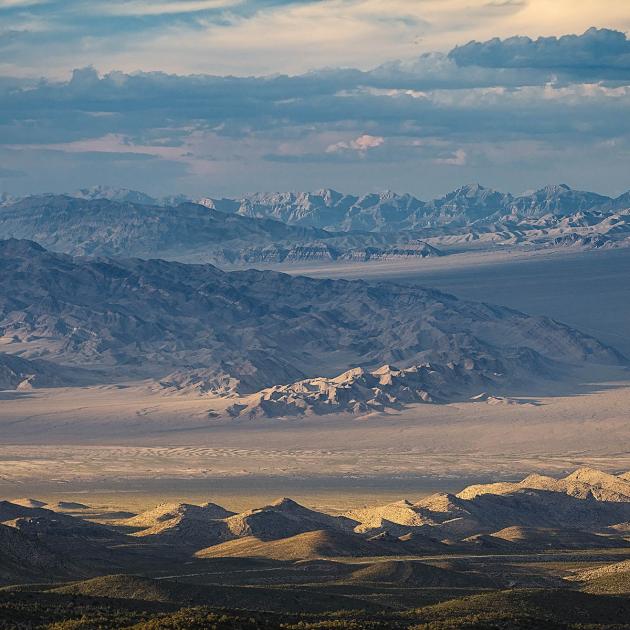 An Air Force plan would threaten the refuge by adding new development and roads that could interrupt wildlife migration paths and force wildlife into smaller and smaller areas.

Along bipartisan lines and with a large enough margin to withstand a veto threat by President Trump, lawmakers passed the National Defense Authorization Act without a provision that would have given the military control over a large section of the continental U.S.’ largest national wildlife refuge, making it part of the Nevada Test and Training Range, which is used for war exercises by the Air Force. Roughly half of refuge is already co-managed by the Air Force, and airspace totaling around three times the size of the state of Connecticut is already reserved for Air Force training over the state of Nevada.

“These lands have far too high ecological, cultural and recreational values to be turned into bombing ranges,” - Paul Spitler, director of wilderness policy at The Wilderness Society

The Desert National Wildlife Refuge was established in 1936 to preserve habitat for Nevada’s state animal, the desert bighorn sheep. Across more than one and a half million acres, that species and hundreds of varieties of birds inhabit landscape ranging from cactus-dotted scrubland to ponderosa pine forest. Over the last few years, the Air Force’s proposal to expand its footprint in the refuge has drawn fierce and ideologically diverse opposition. In 2019, the Nevada state legislature passed a resolution opposing Air Force takeover of the refuge, and the Las Vegas Review-Journal, often heavily critical of environmental protection efforts, has editorialized against the move.

Concerned officials at Desert National Wildlife Refuge said that an Air Force takeover might disturb wildlife, including the desert bighorn sheep, while reducing the capacity of the U.S. Fish and Wildlife Service to protect and manage habitat for endangered and threatened species. Additionally, it likely would have cut off public access to some prime outdoor recreation spots in one of the few places near Las Vegas where you can find peace and quiet. The National Defense Authorization Act passage means a 25-year extension for the current status of the refuge.

"As important as military readiness is, these lands have far too high ecological, cultural, and recreational values to be turned into bombing ranges,” said Paul Spitler, director of wilderness policy at The Wilderness Society, in a statement prior to passage.

Tuhut is vital to the Nuwu present and past

The ancestral homeland of the Nuwu, or Southern Paiute people, touches four states in the Southwest, including Nuvagantu or Nuvankai, the traditional central spot of creation, in what’s now called Humboldt-Toiyabe National Forest. The Desert National Wildlife Refuge, within a few miles of both the Moapa Band of Paiutes and Las Vegas Paiute Tribe reservations, is also a key landscape. Collectively, the refuge and the Sheep Mountain Range within it are known as Tuhut in the Nuwu language.

Nuwu leaders have been fighting the Air Force plans for years, pointing out that even the existing range’s overlap with the refuge has had a damaging effect on Tuhut and its natural and cultural resources. Anderson, vice-chair of the Moapa Band of Paiutes, has recounted tribal members finding missile fragments near the entrance of Pintwater Cave, which is culturally important and has been known as a significant archaeological site for decades. The cave itself, he says, is now largely filled with dirt rattled loose by earth-shaking bomb blasts, blocking passage for sacred rites by the Moapa. There have also been reports of damage to cave art.

Additionally, there is concern about the Nuwu being unable to regularly access parts of the refuge for traditional practices like hunting and gathering herbs and medicinal plants. While harvesting herbs and other practices on refuge land merely requires an up-to-date permit, Nuwu need to make special appointments to use traditional resources on Air Force land. Anderson has compared this dishonor to that of the U.S.’ original move to uproot and force Moapa into reservations: "I don't think it's fair to have to ask permission to go on our ancestral lands.”

And that ancestral connection is deep indeed. There is a Nuwu tradition to bury the last bit of a baby’s umbilical cord in a spot of significance, close to where the person was born, denoting the area where they’re supposed to live thereafter. According to Anderson, Moapa do this in Tuhut so children can grow up with strong ties to the land and be influenced by its gifts—to grow strong like the Nah’gah (desert bighorn sheep), which are regarded as close spiritual kin to humans, and have knowledge of the land’s plants and animals.

This makes the notion of the Air Force peppering the area with munitions doubly troubling. Not only would continued (and expanded) war exercises  impair everyday Nuwu access to the land, preventing people from practicing their culture  and customs, but it could literally, physically bombard the remnants of generations still planted in the soil.

This summer, Anderson wrote that though their rights and dignity have often been ignored, the Nuwu would continue fighting for the refuge—that they would persevere even “as an invisible people whose voices are drowned out by the winds from the many bombs that blast through where our umbilical cords lay, that connects us to this land we call home.” That they did, and in doing so won a resounding victory for Tuhut and the life it has nurtured since time immemorial.

Wins and losses for conservation in defense bill compromise

Why is the Air Force trying to take over wildlife refuge land in Nevada?

Will bad target shooting policy literally leave this monument in the crosshairs?