Public lands foe, known for extreme views, must be removed from office

The Trump administration recently withdrew the nomination of William Perry Pendley to take over as full director of the Bureau of Land Management (BLM), reacting to intense public criticism of the anti-public lands extremist’s fringe views. But Pendley is still acting director, meaning he has control of more than one-third of America's public lands. He must be removed from office entirely.

Pendley is best known for a belief that national public lands were intended to be “sold” and denying the science behind climate change. In recent months, he has gained additional notoriety from a series of racist and inflammatory comments. He is uniquely ill-suited to manage our shared natural resources. And yet, that’s what he’s been doing for months; as acting director of the BLM, Pendley exercises authority over hundreds of millions of acres of public land, in which capacity he has masterminded the agency’s focus on drilling and mining at the expense of uses like outdoor recreation. 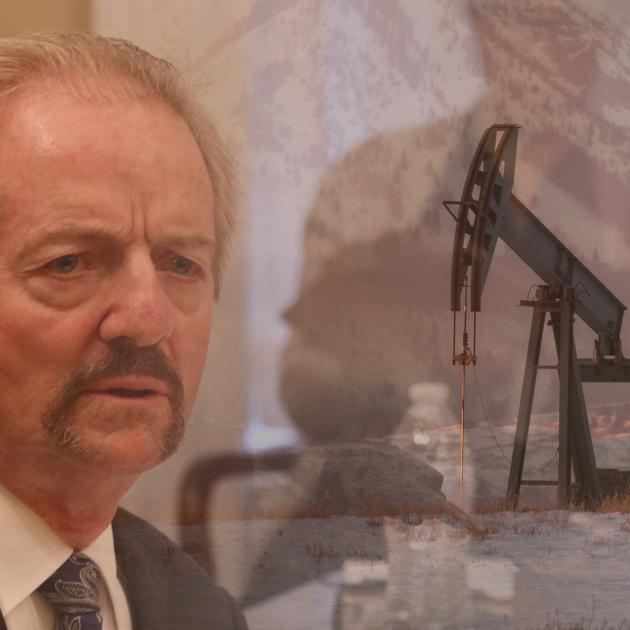 Pendley is still acting director of the Bureau of Land Management, meaning he has control of more than one-third of America's public lands. He must be removed from office.

Prior to joining the Trump administration, Pendley was best known as former president of the Mountain States Legal Foundation, an anti-conservation group that seeks to gut environmental laws. There, he served as counsel for development interests trying to gain access to public lands. Pendley also worked as an Interior staffer under infamous Reagan administration secretary James G. Watt, who is known primarily for policies that ruthlessly exploited natural resources and weakened conservation measures.

Since Pendley was named acting BLM director in July 2019, he has: 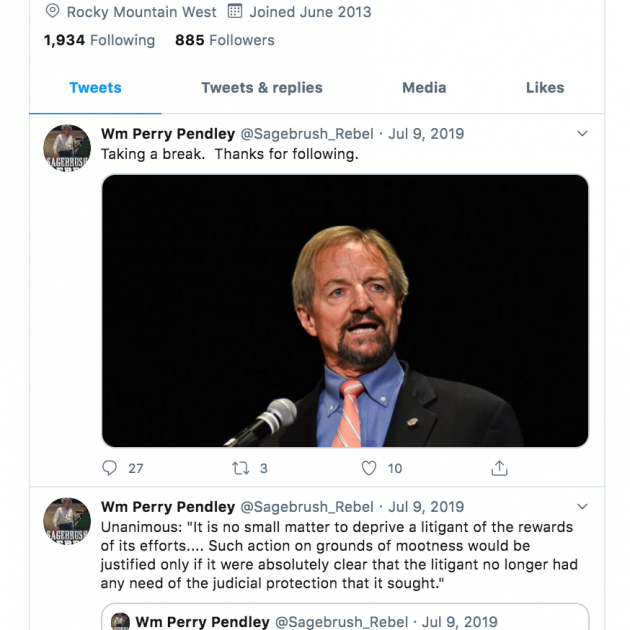 The acting director of the Bureau of Land Management (BLM) has insulted young climate advocates, compared climate change to unicorns and lashed out against diversity.

Reasons to ask that Pendley be removed from office go beyond his anti-public lands policies.

In recent months, civil rights and social justice groups led the call to reject Pendley’s confirmation. A letter to the Senate Energy and Natural Resources committee, signed by 301 organizations including civil rights groups like the NAACP, stated that Pendley’s “inflammatory rhetoric and actions opposing virtually all issues of social justice and diversity including targeting native communities, immigrants, the LGBTQ community and people of color should alone be disqualifying[.]”

After Pendley's nomination was withdrawn, similarly, 198 social justice organizations, Indigenous groups and others sent a letter to the Department of the Interior urging that Pendley be removed from his role as acting director.

Here are six of the reasons we’re concerned about Pendley and feel he is unfit to work at the Bureau of Land Management:

1. He has fought to drill in sacred lands and mocked Native American religious beliefs

In June 2020, the U.S. Court of Appeals for the District of Columbia ruled in favor of cancelling a lease that would allow drilling in Montana’s Badger-Two Medicine area, land that is culturally important to the Blackfeet Nation. It was a powerful and long-awaited victory.

Some background: For decades, energy companies have been trying to drill in Montana’s Badger-Two Medicine, in violation of bedrock environmental laws and against the wishes of the Blackfeet Nation. In 2016, one company that still held leases in Badger-Two Medicine relinquished its claims. Soon after, the other remaining leases were cancelled by the Obama administration. One of the leaseholders, Solenex, kept fighting to drill in the landscape, but through the legal battle that followed, the Interior Department maintained the Badger-Two Medicine was off-limits.

Well, guess who disagreed? Not only did William Perry Pendley represent Solenex at Mountain States Legal Foundation, but in his capacity as a commentator for various media outlets, he loudly called for leases to be reinstated to allow exploratory drilling. Downplaying the cultural significance of the landscape, which is key to the Blackfeet creation story and a designated Traditional Cultural District under the National Historic Preservation Act, Pendley has said the Badger-Two Medicine simply "belongs to the U.S. government ... and [Solenex] has a property right to it."

While the Badger-Two Medicine is currently protected by a recent court ruling, it’s the subject of one of dozens of conflicts of interest Pendley has confessed in a 17-page recusal.

2. He’s aligned himself with the fringe anti-public land movement

Pendley is part of an anti-public lands fringe, claiming the “Founding Fathers intended all lands owned by the federal government to be sold” and cheering on any policies that would turn them into places for mining, drilling and development. Additionally, he has implied that the antics of the notorious Bundy family, best known for engaging in an armed takeover of Malheur National Wildlife Refuge in Oregon, are merely an understandable reaction to federal overreach.

3. He opposes national monuments and the Antiquities Act

Pendley called the punitive 2017 review of national monuments, “courageous”; wildly applauded the unlawful cuts to Bears Ears and Grand Staircase-Escalante national monuments that resulted from it; and, when tribes and conservation groups challenged the actions in court, cast the federal government as “David fight[ing] Goliath out West.”

Pendley has also managed the difficult trick of openly attacking the very existence of national monuments, and at the same time portraying conservationists who notice those attacks as mere alarmists. For example, he has both suggested lawmakers “repeal the Antiquities Act,” the law used to protect Bears Ears and other sites, and claimed that fears about not being able to use the Antiquities Act to protect public lands in the future are “ridiculous.”

4. He’s a climate denier and all-around enemy of environmental protection

Unsurprisingly, Pendley is a climate denier, referring to the overwhelming body of research on climate change as “political science or junk science, not real science.” His legal foundation has fought efforts by the Environmental Protection Agency to curb climate change-driving greenhouse gas emissions. Given that a major chunk of those emissions come from fossil fuels that are extracted on public lands, and reducing those emissions is considered a key starting point for addressing climate change, it’s distressing to think of Pendley running an agency that oversees tens of thousands of oil, gas and coal leases on public lands.

In his long career, Pendley has also railed against the imaginary “war on coal,” efforts to protect wildlife under the Endangered Species Act and policies intended to strengthen the Clean Water Act.

5. His legal foundation undermined the rights and representation of Tribes and Indigenous communities

In two of the highest profile examples, the group backed a logging company trying to remove protections from forests surrounding northern Wyoming’s Bighorn Medicine Wheel, which is considered sacred by some tribes; and represented Fremont County, Wyoming, in an attempt to minimize Native American involvement on the county’s board of commissioners.

Per the media outlet Native News Online, the Mountain States Legal Foundation has “consistently litigated against tribal interests,” while the Association on American-Indian Affairs, a nearly century-old Native American advocacy group, has described the foundation as “opposed to government efforts to protect Native American sacred sites.”

Discussing then-looming threats to Badger-Two Medicine, before the recent court decision, Tom Rodgers, an advisor to the Rocky Mountain Tribal Leaders Council and Blackfeet tribal member, recently told Native News Online “If they can do this with Badger-Two Medicine, this administration can do it anywhere, to any tribe. It’s the latest terrible betrayal in 242 years of betrayals[.]”

With Pendley leading the BLM, a broader federal campaign against tribal public land interests seems very possible—especially given the past writings of Pendley himself, which, at best, whitewashed white European colonizers’ treatment of Indigenous tribes (and at worst, valorized federal government treatment of tribes as “an attempt to achieve a Jeffersonian ideal”).

6. He’s been called a bigot and a racist by leading social justice groups

More than 300 groups including the NAACP and the Native American Rights Fund have denounced the nomination of Pendley.

That’s no surprise. In keeping with Pendley’s history of attacking Indigenous rights, he has repeatedly shown himself to be incapable of understanding the needs of a diverse national constituency—especially the needs of Black communities and people of color, who have often been left on the sideline when it comes to land management decisions.

A few examples: Pendley has likened the Black Lives Matter movement to cancer and claimed it is based on a “terrible lie”; blasted diversity initiatives and implied “diversity and race-based decision making” are killing people; and fearmongered about an LGBTQ “brainwashing” program being used in classrooms to indoctrinate young children.

William Perry Pendley is unfit to serve at the BLM, period. Tell your senators he must be removed from office.