4.7 billion tons of greenhouse gases could be released from Trump-leased lands

Public lands belong to all of us, but most would be shocked to learn what’s been happening on these shared places. Until now, the truth has been reserved to only a select and powerful few in the energy and mining industries.

A new report by The Wilderness Society reveals the Trump administration’s practice of blindly leasing public land for oil and gas development without considering climate change. Notably, officials are handing out these parcels of land while ignoring the emissions bomb they will release if development moves forward.

Our experts took a deep dive into the records of public lands leased to the oil and gas industry since Trump took office in January 2017. They found that the administration has leased over 7.2 million acres of land and water to private companies for the extraction of fossil fuels – an area larger than the state of Maryland.

If the leases are developed, the fossil fuels extracted on those lands could pump as much as 4.7 billion metric tons of greenhouse gas emissions into the atmosphere in the next three decades. That amount matches the emissions reported by all 28 European Union countries combined in a year, according to recent data.

As carbon gas emissions reach an all-time high, scientists are adamant that we need to be more mindful of how our actions impact the Earth. The planet has already warmed by 1°C (1.8 degrees Fahrenheit) in the last century, and we’re already seeing the effects – more destructive hurricanes, longer wildfire seasons and rising sea levels, just to name a few.

The Trump administration has handed out over 7.2 million acres of land and water for fossil fuel extraction – an area larger than the state of Maryland

The situation will get worse if we don’t act fast. According to the United Nations, we only have 11 years to avoid the most catastrophic effects of the climate crisis. If global temperatures increase by 1.5 degrees Celsius (2.7 degrees Fahrenheit) or more, we will see irreparable damage, such as loss of biodiversity and the disappearance of the Arctic’s summer sea ice.

Trump’s decision to ignore the climate impacts of leasing decisions runs counter a global effort to act on climate. But it also goes against the wishes of a growing number of Americans who want climate action. A University of Chicago poll revealed that 7 in 10 Americans accept the science on climate change and among them, 83 percent think the federal government should take steps to address the issue before it’s too late.

American people were left in the dark

The Trump administration’s leasing of public lands without regard for the harmful emissions that will result from those actions is careless, to say the least. But the way the practice is being hidden from the public is deliberate, and quite frankly, sneaky.

As detailed in a report @Wilderness is releasing today, the projected emissions from oil and gas leases sold by Trump admin in last 2 years equal the combined emissions of all 28 countries in the European Union.

Since entering office, however, President Trump has ignored the existence of NEPA and rescinded the new climate change rule. The move left the door wide open for oil and gas companies to drill on public lands with no concern for the potential climate risks associated with their activities.

What's worse, the Trump administration hasn't been keeping an official record of potential emissions stemming from these developments on public lands. Historically, the federal government has done a bad job at sharing that information. But Trump has effectively scrapped all policies that require the data to be public.

It’s a dirty move – and we’re not the only ones saying it. In at least 12 recent court cases, judges ruled that the government bypassed NEPA when approving projects on public lands by not fully disclosing carbon emissions and climate impacts.

In one of the most recent rulings, environmental groups in Montana argued that the Department of the Interior had illegally approved the expansion of a coal mine without informing its impact on air pollution and greenhouse gases. The judge halted the project and ordered the agency to take a closer look at the climate change impacts.

Public lands are a huge contributor of emissions

The U.S. is the second largest emitter of greenhouse gases in the entire world, just behind China. And although often forgotten, fossil fuels drilled and mined on public lands are a big part of what makes the country such a big contributor to the climate crisis.

A federal report released in 2018 showed that 24 percent of greenhouse gas emissions pumped into the air in the U.S. by cars, power plants, airplanes and other sources came from burning fuels that were extracted on public lands and waters.

Let’s just put it like this: If American public lands were their own country, the fossil fuels extracted on those lands would collectively make it the fifth-largest greenhouse gas emitter in the entire world.

As the world feels the pressure to tackle climate change, the U.S. needs to take responsibility for its huge share of dirty emissions. A big part of the solution could be closer than we think – in the form of cutting emissions stemming from drilling and fracking on public lands. 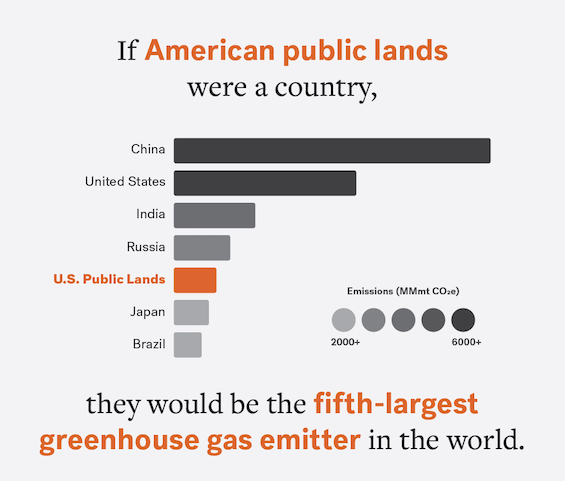 On that front, there’s good news and bad news. The good news is that our experts found that emissions from public lands have been going down, mostly due to the decline of coal, an increasingly uneconomical power source. If current trends continue, public lands emissions will shrink by 22 percent by the year 2030.

The bad news is that we’re still way off target. To limit global temperature increases to less than 1.5°C (2.7 degrees Fahrenheit), we will need to roughly double that reduction.

Part of the solution, not the problem

As global temperatures get warmer and climate change starts to knock on our doors, it’s clear that we need to implement solutions now, not later. The best way to start is by tackling emissions originating from fossil fuel extraction in our backyards – our shared public lands.

We need a plan that would require the government to perform a thorough climate analysis before making any land management decisions. A plan that would make emissions data more transparent and available to the public. And that would create a roadmap to phase out fossil fuels and implement environmentally responsible renewable energy on public lands.

Given that the federal government manages energy development on federal lands, it’s only logical that this is where we would start to implement solutions to avert a climate catastrophe.

Report: We have 10 years to make a difference in climate change