Sitting along the border of eastern Virginia and North Carolina, the Great Dismal Swamp is a unique and valuable landscape, rich in both natural wonders and culture. It contains some of the last traces of a massive stretch of forest that once spanned more than one million acres and has served as a home for native people and wildlife for thousands of years.

The Great Dismal Swamp is home to the ancestral lands of the Nansemond Indian Nation; historic lands of the Haliwa-Saponi and Meherrin Tribes; the largest known collection of archaeological artifacts from Maroon colonies (generational communities of people of color who escaped a slaving society by living hidden in the marshes); one of the only known water-based stops on the Underground Railroad; and a thriving community descending from early colonial Free People of Color whose families resisted oppression by retreating toward the edge of the swamp.

Both the natural landscape and cultural heritage of this great forest are threatened by climate change, the expansion of nearby cities and ongoing extraction and transportation of dirty fossil fuels. Preserving and protecting the Dismal and its rich history and culture is vital to the health of the communities and ecosystems of the region.

The Great Dismal Swamp holds the largest known collection of archaeological artifacts in the continental United States from Maroon colonies, multi-generational self-sufficient communities established throughout the Dismal wilderness from the 16th century until the Civil War. Thriving in this imposing land, which one white colonial planter dismissed as “a “vast body of mire and nastiness,” the maroon communities persisted for generations.

A refuge on the Underground Railroad
The Great Dismal Swamp National Wildlife Refuge hosts one of the only known water-based stops on the Underground Railroad. Many enslaved African Americans would use the swamp as a temporary hiding place before traveling northward to freedom.
Untold stories of precarious lives
Communities like Skeetertown, which was home to Free People of Color who blended the traditions and practices of their African American, Indigenous, and European ancestors, were located on the fringes of the forest.
Seasonal home to 100 species of migratory birds
The Great Dismal Swamp is home to many endemic species, including over 200 species of bird. It is one of the few areas on the Atlantic Coast where populations of migratory birds like the Swainson’s warbler remain stable.
Clean water reservoir for 1 million people
The water of the Great Dismal Swamp is unusually pure, and it is now part of the water resource catchment for the Hampton Roads region, home to 1.8 million people.

The Great Dismal Swamp is a precious cultural and historical resource—embedded in a landscape threatened by increased development as well as storm surge and other effects of climate change. Now covering roughly one-tenth of its 1 million-acre extent from when George Washington first visited it, the swamp has been damaged by centuries’ worth of efforts to drain the swamp, extract timber, and build water and land infrastructure. All that development dried out the soil, stripped back the tree cover and left the swamp bereft of its natural means of self-regulation and balance. The result has been devastating forest fires, soil erosion, pollution due to energy infrastructure and species loss. These threaten not only the swamp and its natural and cultural treasures, but its capacity to absorb and trap carbon pollution that drives climate change. 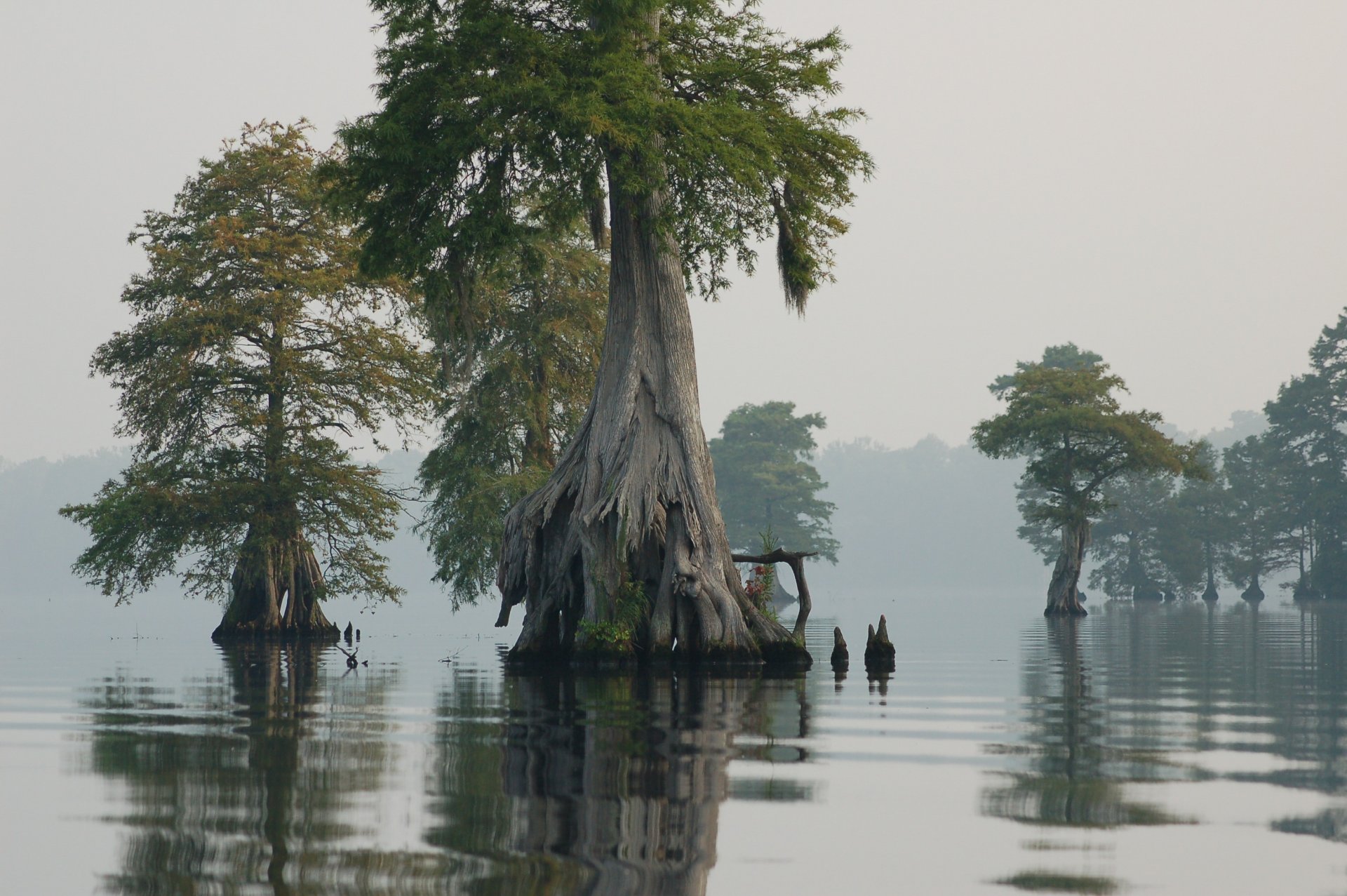 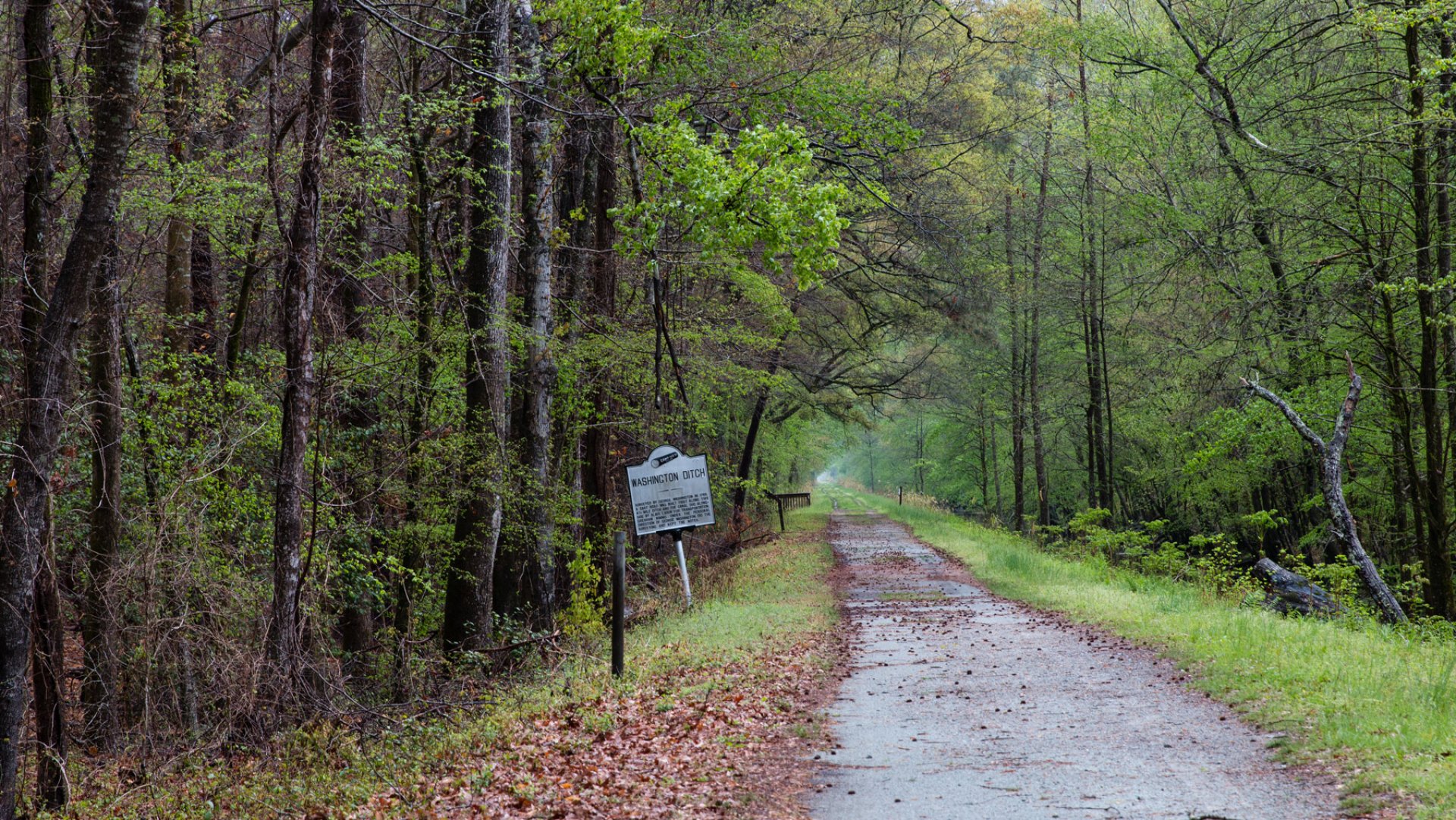 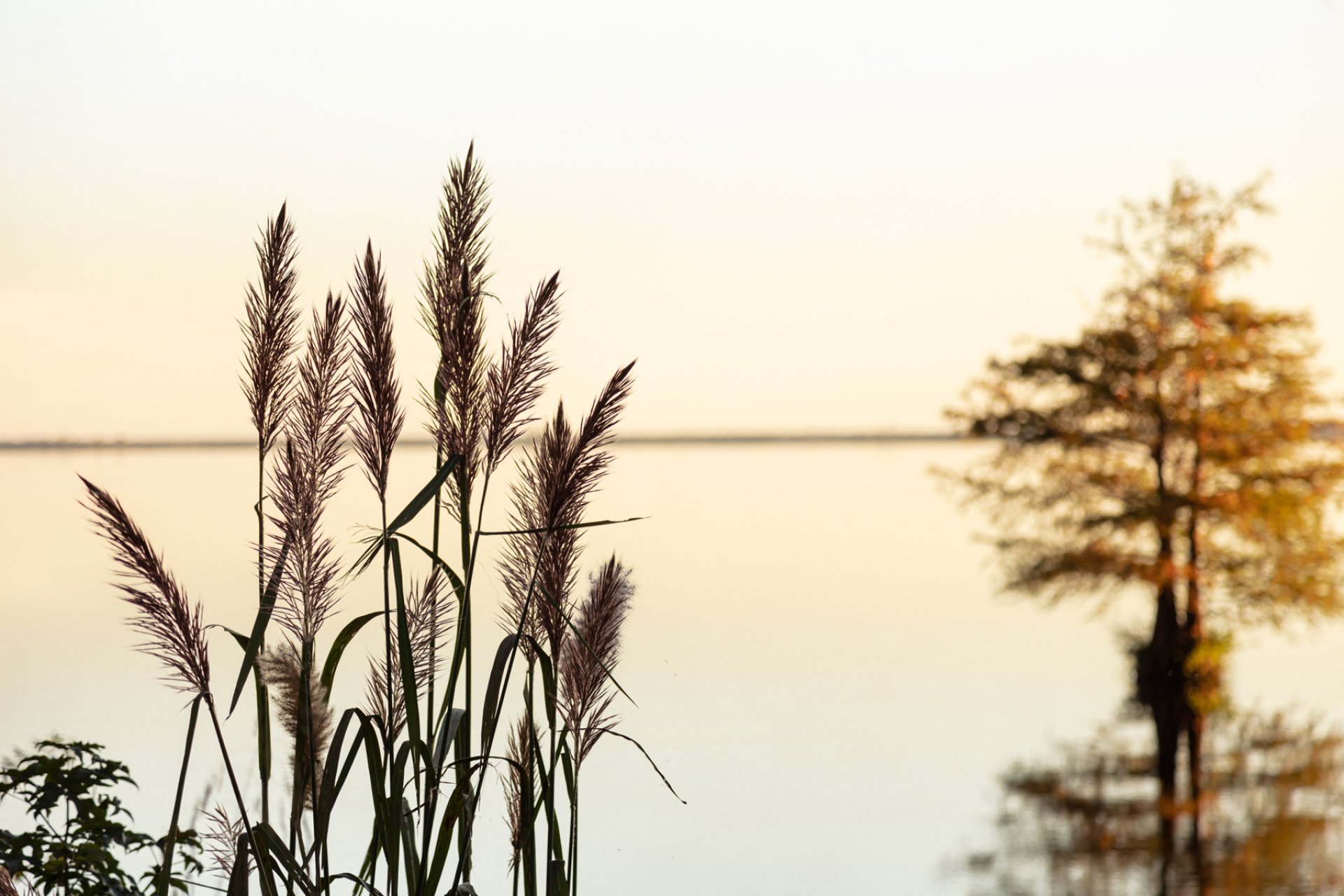 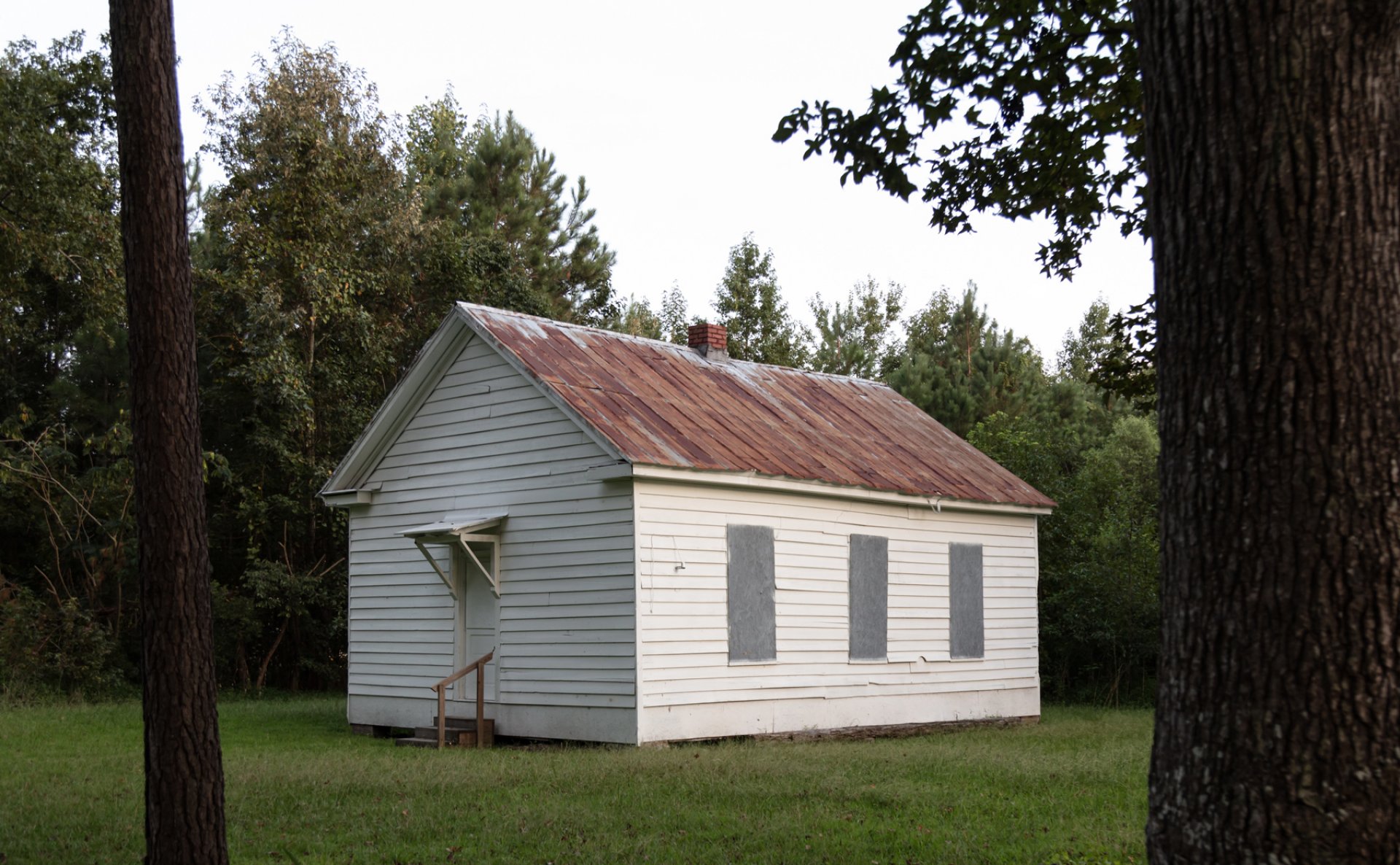 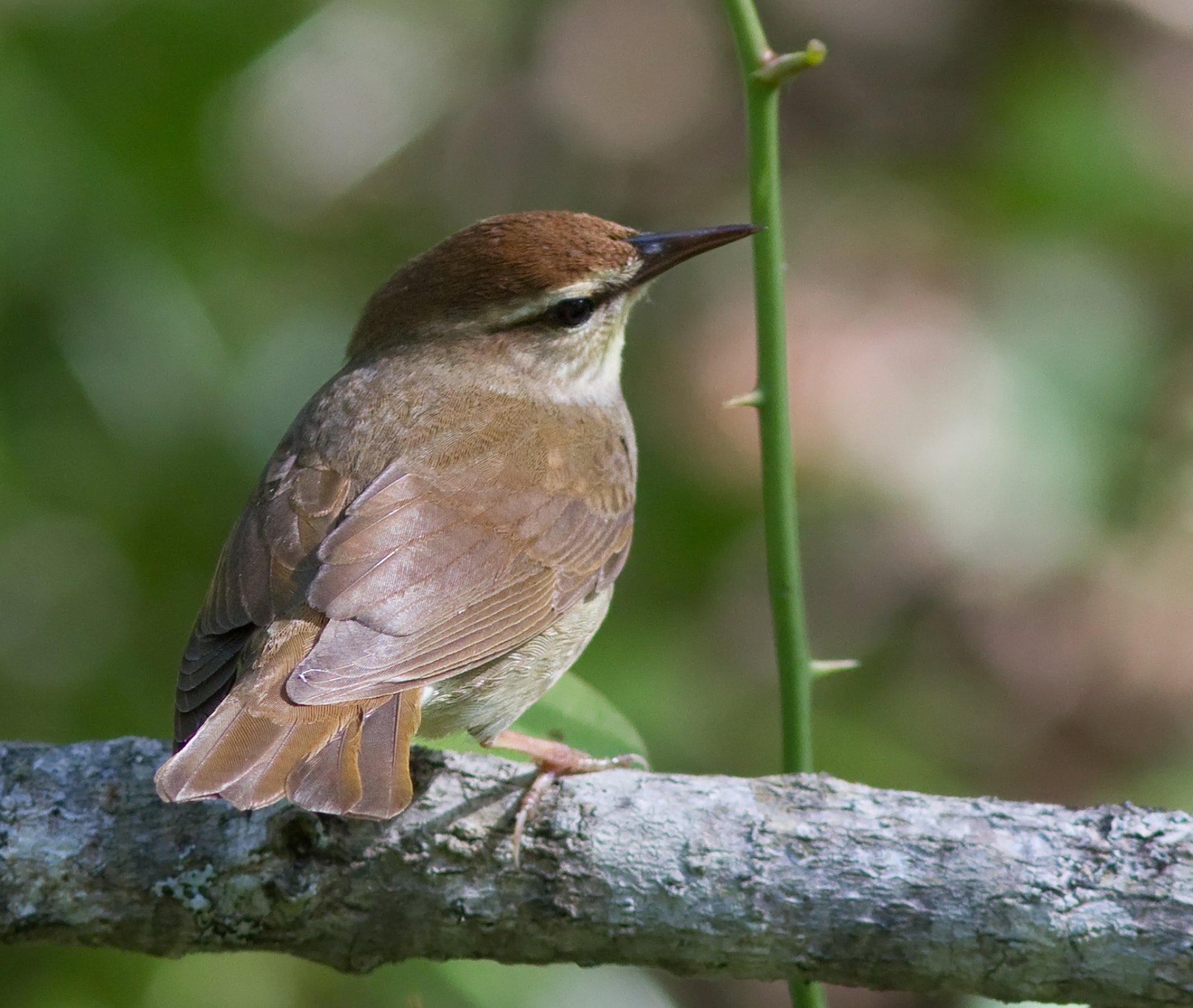 Washington Ditch is the remnant of a five-mile ditch ordered dug by George Washington in the late 1700s from the western edge of the Dismal to Lake Drummond.

Lake Drummond, named for William Drummond, the first Governor of North Carolina, is one of very few natural lakes in the state of Virginia.

East of the Great Dismal Swamp, Cornland School was established by formerly enslaved people soon after emancipation and supported primarily by the Black community.

The Great Dismal Swamp is one of the few areas on the Atlantic Coast where populations of migratory birds like the Swainson’s warbler remain stable.