No exit: How our public lands are fated for oil and gas development

About 90 percent of public lands and minerals managed by the Bureau of Land Management are open to oil and gas leasing due to flaws in the agency's policies.

The “No Exit” report shows that regardless of conservation value or potential energy resources, the Bureau of Land Management automatically places our public lands on the highway to oil and gas leasing. Instead of seeking to preserve some of the nearly 250 million acres of public lands and 700 million acres of subsurface mineral resources owned by the American people, the agency relies on outdated and unbalanced policies and defaults to managing public lands for energy development.

This directly conflicts with the BLM's own guiding principle that some lands, especially those with low potential energy resources, be managed for conservation, wildlife habitat and recreation.

Public lands development rigged in favor of the oil and gas

Currently, nearly 32 million acres of BLM lands are leased for oil and gas development, including areas that do not contain oil and gas. Lands under lease remain unavailable for any other use, even when they are not actively under development. And the majority of these leased lands—60 percent—remain undeveloped due to oil and gas companies hoping for future profits if energy prices rise or the land could be sold.

In the end, it is the American people who lose because the development of our public lands is rigged in favor of the oil and gas industry. Acres of wildland that may be too sensitive for drilling are still never made available for public use. And millions of dollars in taxpayer revenue is lost on leased lands sitting idle, as the industry avoids paying any royalties and squats on large tracks of land through a tool known as suspensions. As of April, the oil and gas industry is hoarding 19.3 million acres without paying royalties—that’s an area the size of South Carolina! 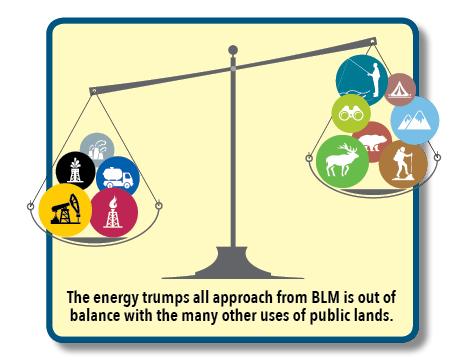 Our public lands deserve a chance at something other than energy development. To avoid defaulting our public lands to oil and gas leasing, the BLM needs to take immediate action to follow its own principles and modernize its outdated practices.

The BLM is misguided by its own guidance

It seems absurd, but the BLM’s interpretation of its handbook, which lays out steps to identify whether land has potential for oil and gas development or is too sensitive for drilling, is out of step with its own guiding principles for land management.

The handbook directs the agency staff to manage BLM lands based on the potential of recoverable oil and gas deposits beneath the surface, helping to focus staff on areas with the most potential. However, the BLM does not follow through on closing lands to leasing, so the majority of lands can still be leased even if the potential for oil and gas is very low or nonexistent. This leaves us with 90 percent of BLM lands and minerals being open to oil and gas development!

The BLM’s unbalanced approach to leasing and development decisions puts conservation on the backburner, leading to several problems:

1. Leased land can never be managed for wildlife, recreation or land conservation

The BLM considers any resource potential and undeveloped leases as prohibitive to other management actions that would benefit recreation, wilderness and wildlife.

This means that once BLM leases land to the fossil fuel industry, it is nearly impossible to manage it for other uses. Meaningful conservation that could occur on sensitive lands never even has a chance. Even land with very little or no potential energy development is within the grasp of oil and gas companies and out of reach of the American public.

2. Defaulting to energy development is out of step with meeting national climate goals

If all leases on public lands were developed by the industry, greenhouse gas emissions from public lands would greatly set back our nation’s climate goals.

We now know that energy extracted from public lands accounts for more than 1/5 of the U.S. greenhouse gas footprint. Continuing to lease more and more acres of public lands to the oil and gas industry only sets us on a path towards increasing polluting emissions.

3. Public lands are not managed for the benefit of the American people

Many Americans strongly support managing our wildlands for something other than oil and gas development.

But most Americans never get a voice in the lands’ management, enjoy scenic landscapes or profit from revenue that could be generated if they were managed for something other than oil and gas. Instead, oil and gas companies hoard public lands for decades without paying royalties. Undeveloped leases generate less than two percent of total oil and gas revenue, and nearly 80 million in revenue has been lost by companies not paying rent on those leases. 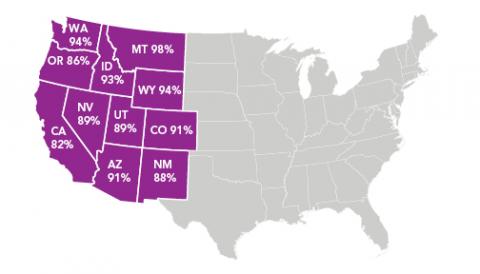 Most states in the West have close to 90% of Bureau of Land Management lands open to oil and gas leasing.

Speculative leasing: Putting the majority of our public lands at risk and creating a double standard

The report examines how a staggering amount of land with low or no potential for development is STILL open to leasing, leading to speculative leasing. This means that the BLM keeps public land open, and oil and gas companies lease it in hopes that energy prices will rise, cheaper methods of extraction will be invented or leases can be sold off to another company.

By allowing speculative leasing, the BLM encourages a ridiculous double-standard. While the agency prioritizes oil and gas leasing, it makes it very hard for any tract of land to meet the standard to be managed for conservation or recreation. And even if a piece of land is shown to contain abundant wildlife habitat and recreation opportunities, the BLM often declines to set it aside.

What is even worse is that the BLM sees the presence of leases, even highly speculative leases, as a basis for rejecting new conservation designations. This cycle completely undermines conservation efforts on our public lands.

Energy must no longer trump everything else on public lands

It is too easy for land to be leased for oil and gas development and far too difficult to protect land for conservation. With 90 percent of our public lands and minerals managed by the Bureau of Land Management open to leasing, we have several policy recommendations that BLM can enact immediately that will provide an exit for our public lands from the road to development: