It is not every day that our nation’s public lands play a lead role on the big screen. That changed when the movie Wild hit theaters in 2014.

Oscar-nominated Wild, directed by Jean-Marc Vallee (Dallas Buyers Club) and starring and produced by Reese Witherspoon (Best Actress Nomination), is based on Cheryl Strayed's best-selling memoir by the same name. Strayed's story chronicles her experience of confronting a destructive path her life had taken by embarking on a solo trek covering 1,000 miles along the Pacific Crest Trail, which stretches from Mexico to Canada.

There are few stories that embody the transformative power of wilderness quite like Wild. The Wilderness Society worked with Fox Searchlight to share in this message. The story is a reminder of something we say often--that wild places are important for the way they connect us, not only to each other, but to ourselves. They are places for tranquility and soul searching.

In the book and movie, Cheryl Strayed chooses to hike the Pacific Crest Trail alone after the haunting loss of her mother Bobbi (Academy Award Actress in Supporting Role nominee, Laura Dern) to cancer. After years of reckless behavior, a heroin addiction and the destruction of her marriage, Strayed makes a rash decision to hike the trail with absolutely no experience. Wild powerfully reveals her experience as she forges ahead on a journey that maddens, strengthens and ultimately heals her.

"In the wilderness, what I found is my strength again." - Cheryl Strayed

Beyond the powerful message about the importance of wilderness in the human experience, Wild shares with viewers the beautiful scenery of one of our nation's world-class distance trails. On the Pacific Crest Trail, Strayed was able to hike from California's Mojave Desert through California and up to Oregon and Washington, passing through spectacular wilderness areas, national parks and monuments on the way. The trail itself passes through 48 federally-designated wilderness areas as well as five state parks, six national parks and 25 national forests. We hope this film will inspire more people to protect wilderness. Don’t miss your opportunity to see some of our nation’s most famous public lands on the big screen and to get inspired by Cheryl Strayed’s story of going from lost to found on the Pacific Crest Trail.

Catch glimpses of the Pacific Crest Trail in the Wild  trailer 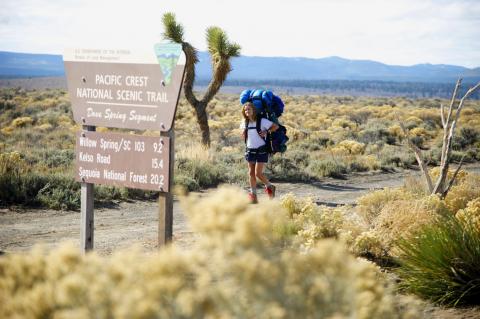 The Pacific Crest Trail is one of the nation's best known long-distance national scenic trails. It is part of the "Triple Crown" of long-distance trails, which includes the Appalachian Trail and Continental Divide Trail. The PCT, as it's commonly called by hikers, runs continuously from the border of Mexico up through California' Sierra Nevada, then onward to Oregon and Washington and the Canada border. Its approximate 2,650 miles travel through some of the most spectacular hiking terrain in the country, from the Mojave Desert and the Sierra Nevada in California to Washington's rugged North Cascades

If you're planning a "thru-hike" on the PCT, you will need several months--usually about 5--to complete the full trail. Many backpackers also enjoy shorter week-long or multi-day trips. And of course there are countless sections of the trail that can be conquered in a day!

54% of the PCT travels through federally designated wilderness.

Looking for breathtaking scenery? Just point to any place on the PCT map and you'll find it. The trail travels through:

Are you ready for a long-distance hike? These tips will help you get started.

See what the author of Wild has to say about wilderness

Cheryl Strayed, author of the memoir Wild is a true friend to wilderness. She celebrated wilderness with us with the public service announcement above. We are pleased to have selected Cheryl as the recipient of our "We Are the Wild" Inspiration Award.

Every Kid in A Park program extended; 4th graders get free park admission