In winter, dropping temperatures and snowy landscapes mean you'll need to prepare differently for a national park visit, but the pay off is well worth the time.

If you're looking for a chance to break free from cabin fever, consider visiting one of our wonderful national parks in winter. Or, just sit back and enjoy the photos below, and see for yourself how our national parks transform during the coldest months.

Arches has some of America's most breathtaking scenes. In winter, white snow contrasts with the red rocks and blue skies to create some stunning sights. While daytime temperatures can rise above 100 degrees in summer here, expect freezing temperatures in winter. Even scant snowfall can make trails and roads impassable, so be sure to plan ahead if you intend to visit this national park in winter. 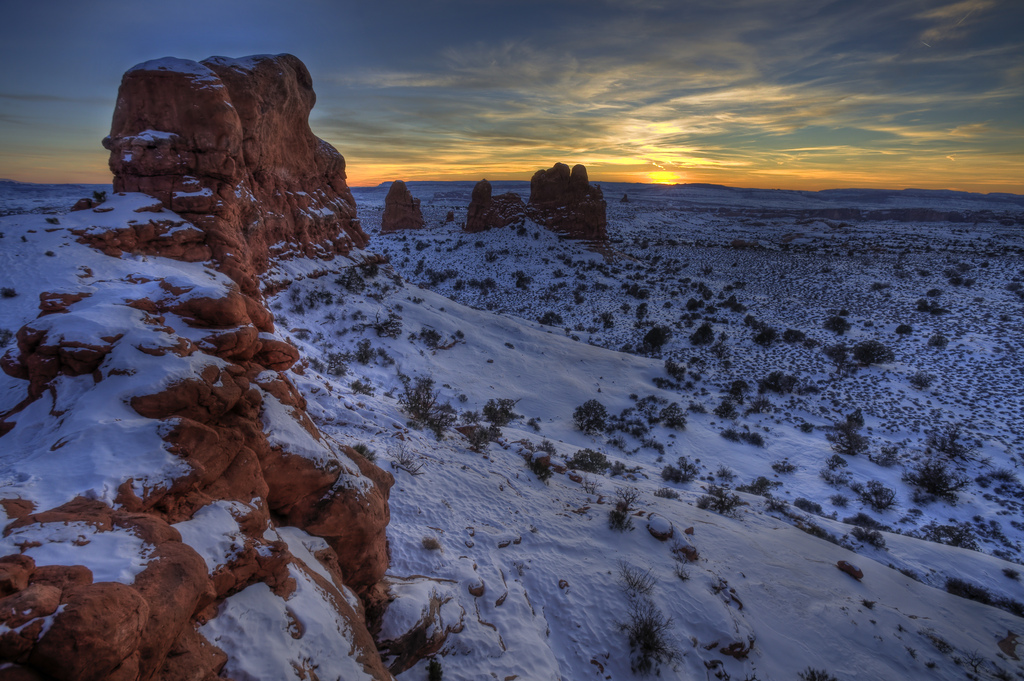 Mount Rainier National Park has all the snow you could ask for in a winter landscape. The area known as Paradise receives an average of 54 feet of snow every year and held the world record for annual snowfall at 93.5 feet in the 1970s. In winter, Mount Rainier also has all the recreation you could ask for: sledding, sliding, skiing, snowboarding, snowshoeing, climbing and camping. 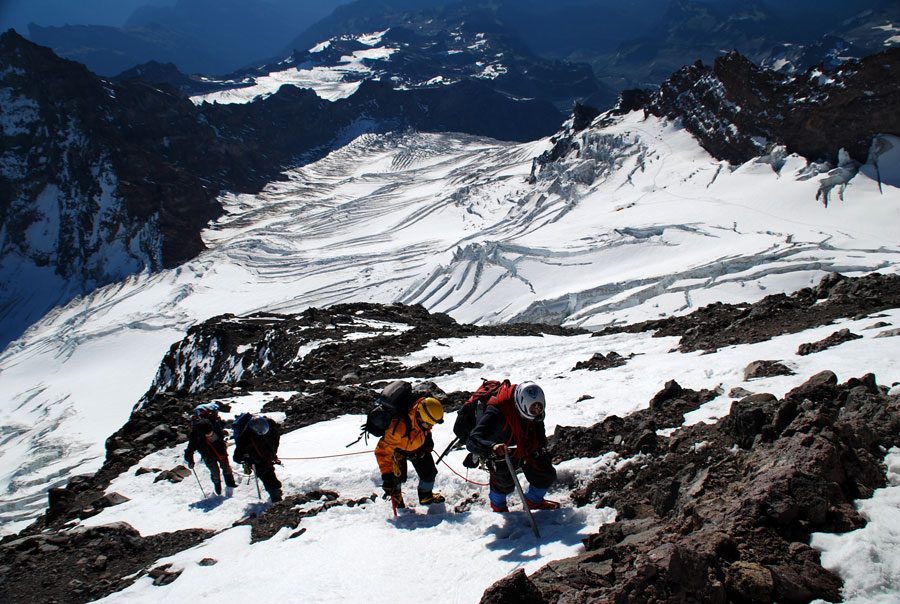 While it may be hard to imagine, Bryce Canyon's earthly spires are even more spectacular when icy. Bryce Canyon National Park also has ideal stargazing skies, and the cold, dry air makes them all the more amazing. Saturday astronomy programs and full moon snowshoe adventures are just a couple of the several incredible programs offered here during the winter season. The annual Winter Festival is held on President's Day weekend. There are many dangers here in this season, however, so if you do visit, be sure to follow park regulations and get up-to-date weather information at the visitors center before venturing out. Boots are mandatory and traction devices are highly recommended for trail hikers, and backcountry permits are issued to only the most prepared and experienced. 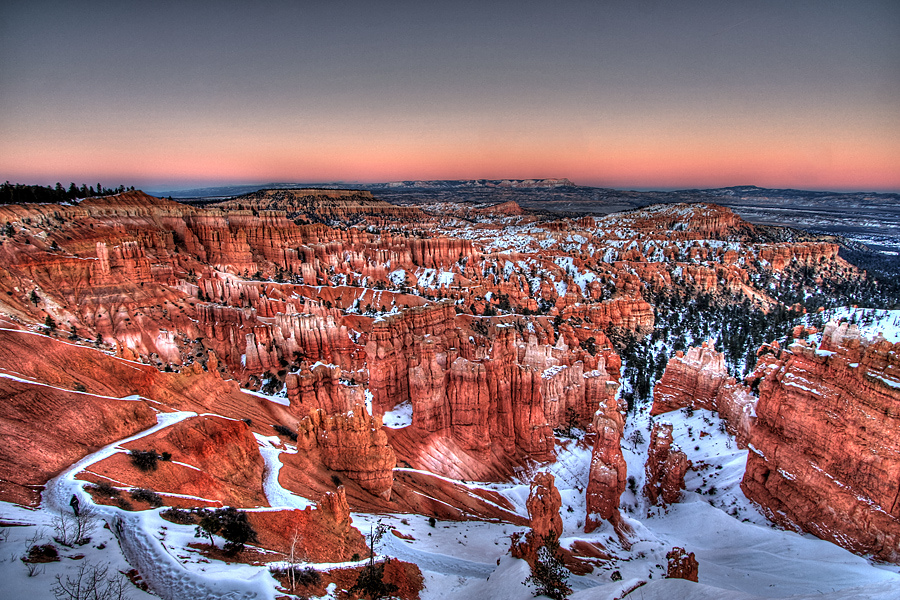 Classic places like Yosemite National Park never fail to amaze. In winter, snowy peaks, foggy slopes, icy waterfalls and frozen streams beacon to visitors who will find beauty as well as fun. Some roads close in winter, but those that access Wawona and Yosemite Valley are cleared. The Glacier Point/Badger Pass Road is also plowed so that skiers and snowboarders can reach the popular Badger Pass ski area. Trails are open for snowshoers, and the Merced River has year-round fishing. 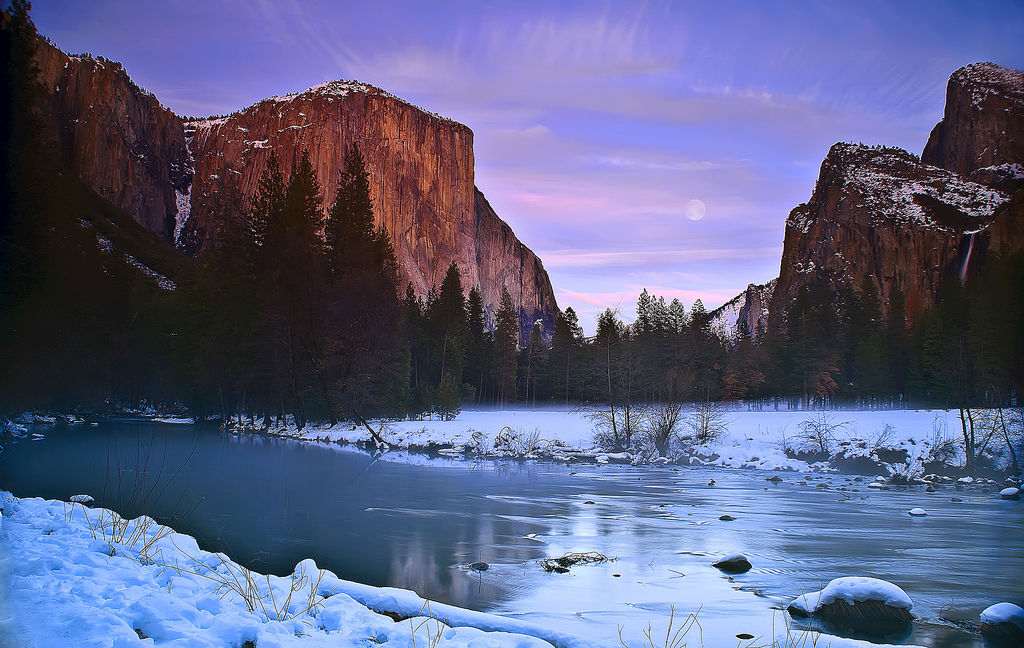 One would expect snow to be status quo at the northern latitudes where Denali's mountains rise from the earth. Snow may begin in August, with winter setting in by October. Denali receives less than five hours of true daylight by the time the winter solstice arrives, but there are some notable advantages to visiting this harsh, remote landscape during its coldest months. Its winters provide even more tranquil solitude, and if you are lucky you may get a glimpse of the breathtaking aurora borealis. You can also see some expert snow sculptures and ice carvings during February's week-long Winterfest. The winter visitor center remains open daily, offering ranger-led snowshoe walks, skiing and dog sledding. With temperatures dropping as low as -40°F, those who are truly bold may even brave the backcountry. 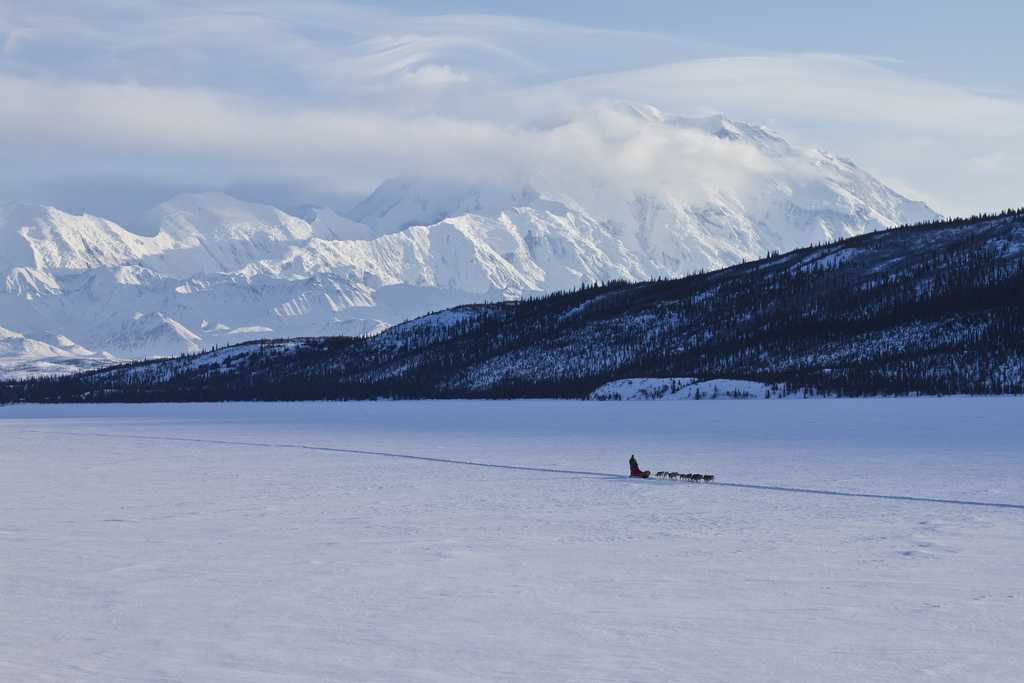 Although the Grand Canyon is a southernly park, its ridges are still blessed with delightful snow in winter. Fog is typical in the early morning hours but afternoons are sunny. The canyon's north rim closes to visitors in fall, but the south rim is open year-round and is likely to be far less crowded for visitors during this season. Those who do come can take a cell phone audio tour, or use a GPS device for virtual caching. 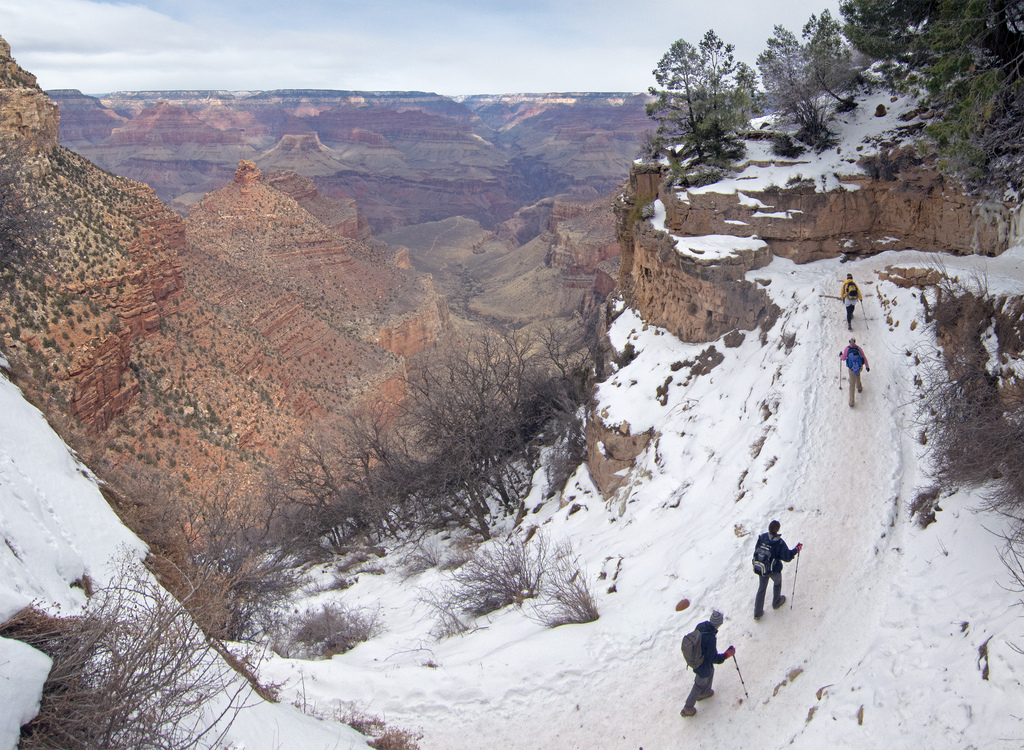 Winter celebrations should include the beginning of America's National Park System upon the protection of this park in March 1872. In winter, Yellowstone's iconic landscapes are inhabited by a plethora of wildlife such as bison, elk, moose and wolves. Its geysers appear even more dramatic in the cool air. Not surprisingly, Yellowstone National Park remains popular for visitors year-round, as evidenced by the numerous recreation offerings in winter including tours by snow-coach, skis and snowshoes. 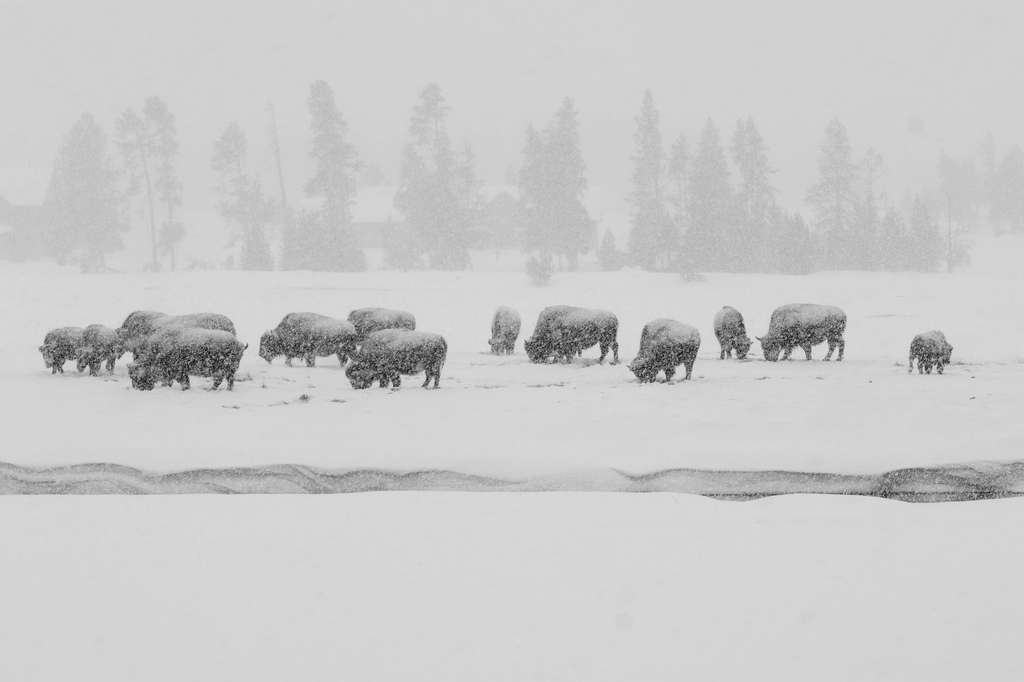 With the highest elevations in the country, Colorado is well-known for being a winter destination, and Rocky Mountain National Park is no exception. With numerous peaks to explore, backcountry skiers can cut through the incomparable continental divide. Other recreation opportunities include world-class snowshoeing, sledding and hiking. 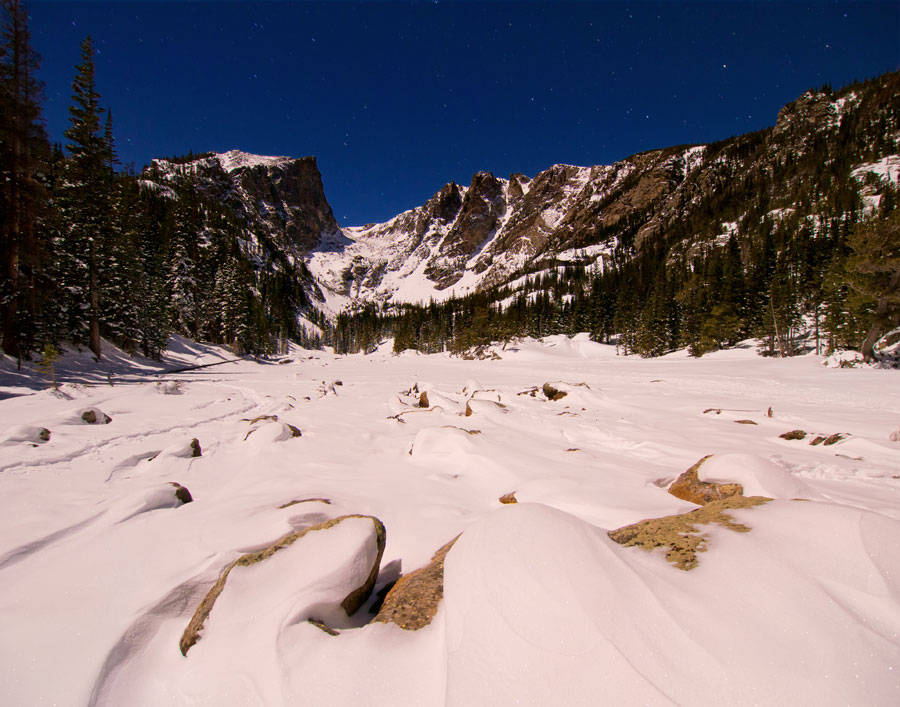 Winter stretches itself from October through June at Lassen Volcanic National Park. Clear lakes become icy, volcanoes become topped with heavy snow and steam vents become especially smoky. For those seeking fun as well as beauty, winter activities are at their peak here, with sledding hills that offer mountain views, snowshoeing for beginners and experts and backcountry skiing that can't be beat. 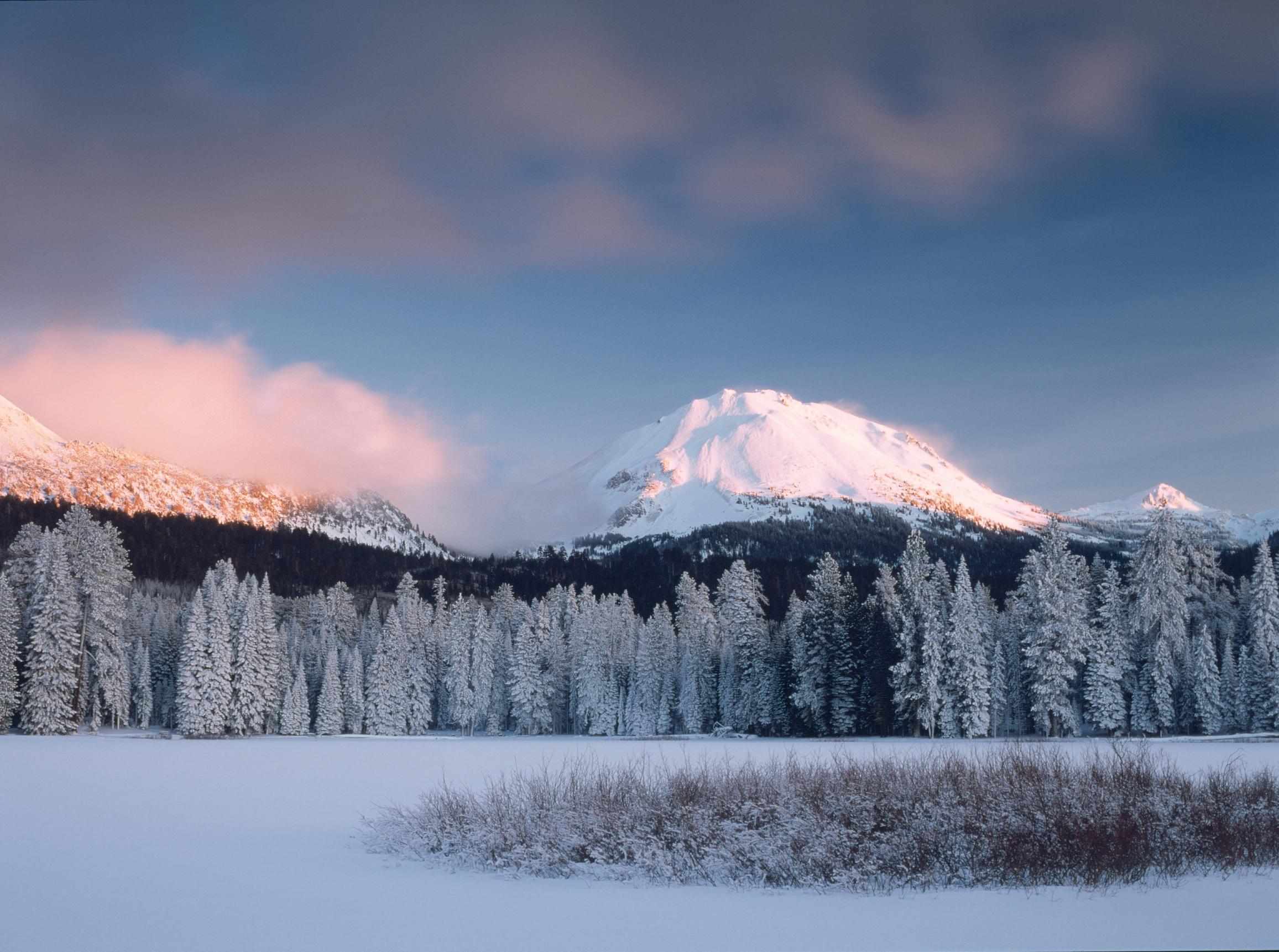 Similar to Arches and Bryce, this Utah destination's red rock canyons sparkle when it snows. Zion National Park's majestic rocks appear all the more dramatic when cloaked in white. Winters in Zion are relatively warm, reaching 50-60°F during the day, but very wet - nearly half of its annual precipitation falls between December and March. If you intend to visit, be aware that trails may close due to snow and ice. 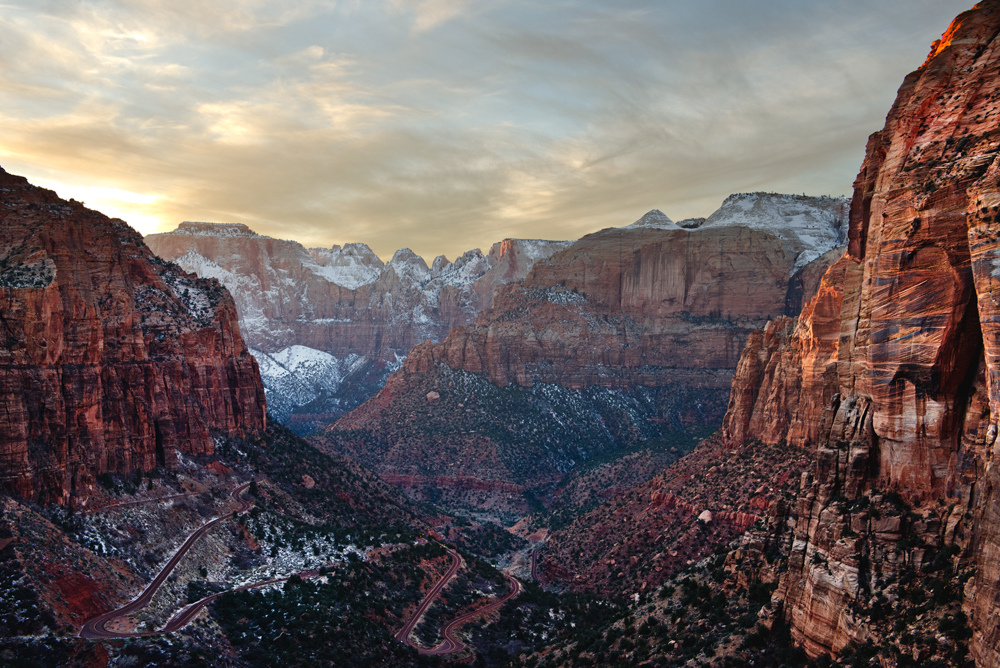 Acadia National Park's waves wildly crash at the shores while its wild creatures venture from their homes in winter. If you're looking for a place to have all to yourself this season, then consider the prime backcountry ski slopes here. Visitors can also take advantage of ice fishing, snowshoeing, scenic drives and dog sledding. 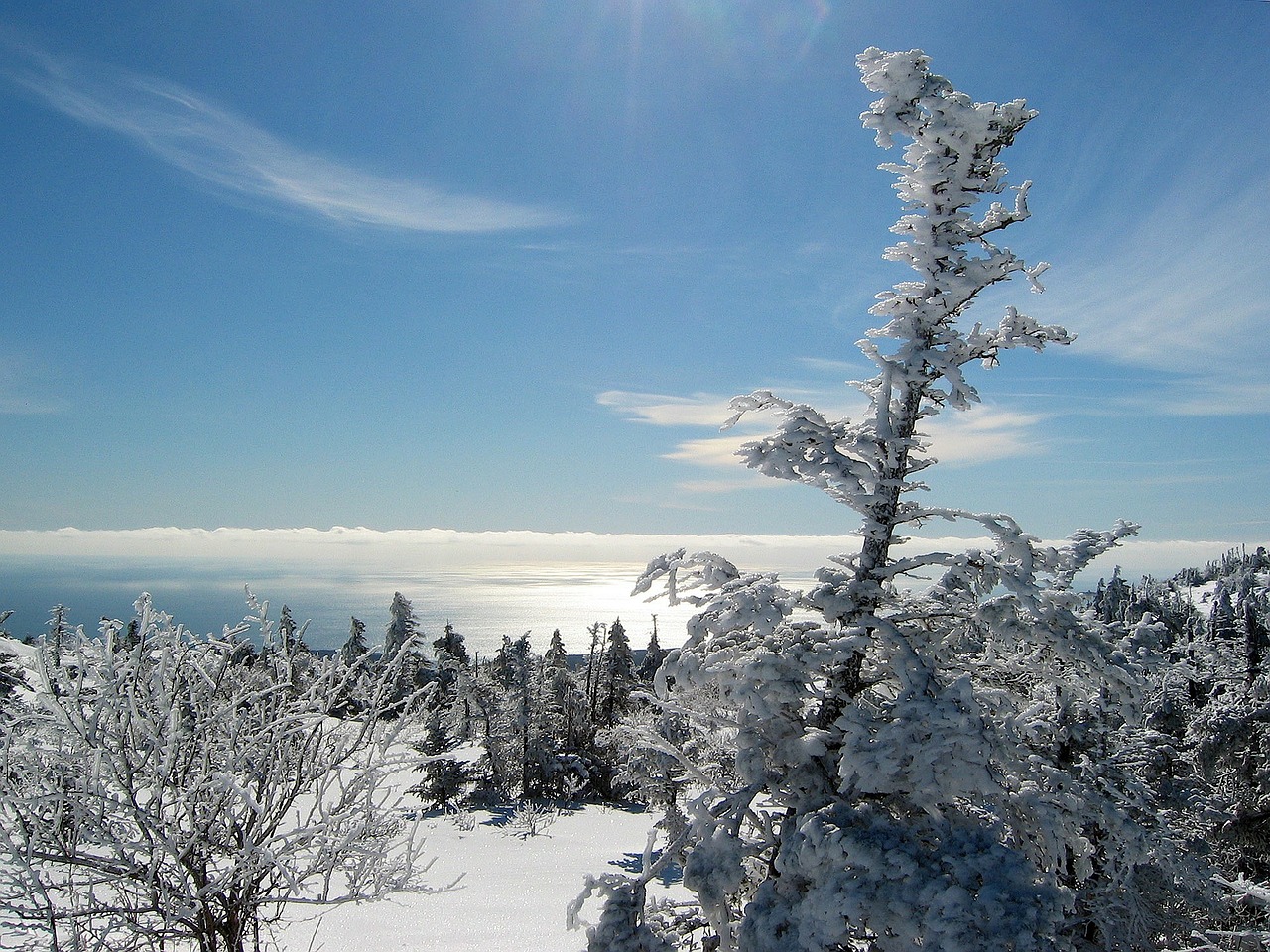 America's most visited park still gets attention after all its gorgeous leaves have dropped. The barren trees become fortresses of ice and snow - a true winter wonderland. If you visit Great Smoky Mountains National Park, be aware that the main roads should remain clear, but secondary ones may be closed. Bears will be in hibernation, but you are more likely to catch a glimpse of wildlife once the foliage has vanished. This is another great place to take a quick jaunt on the Appalachian Trail as well. 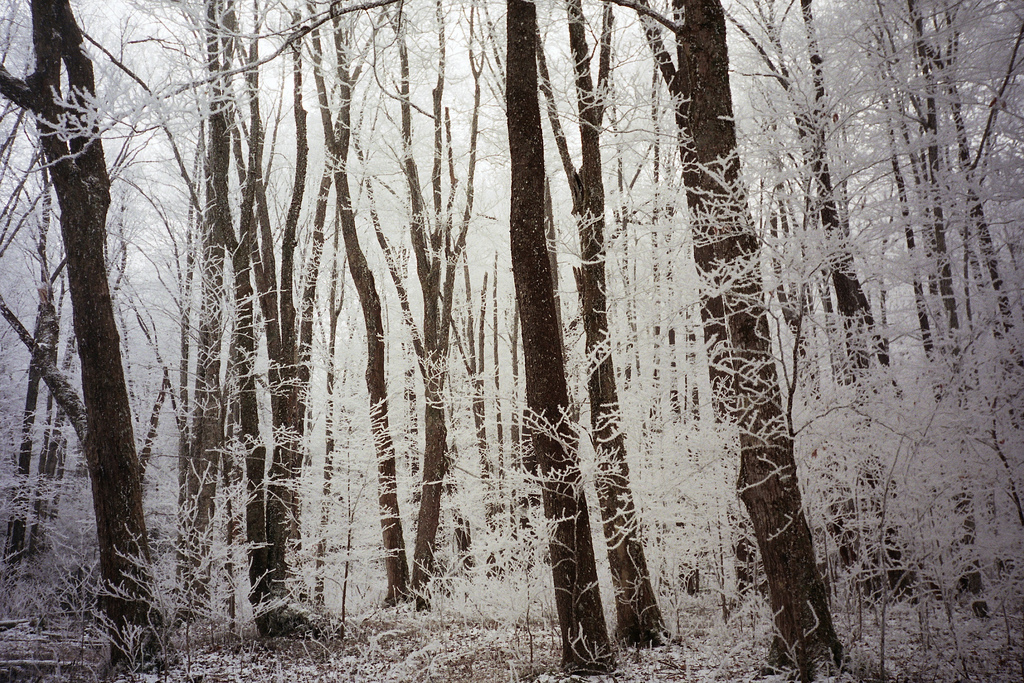 Snow covers Grand Teton National Park's classically beautiful landscape from November to May. Its long winters can be bitterly cold (the coldest temperature ever recorded here was -63°F). Most visitors travel by ski or snowshoe because roads aren't as accessible. Planning ahead is crucial if you do visit in winter. Even this quintessential park could be opened to drilling in the near future, which is why we keep working to protect such special places, even after they've been made into public parks. 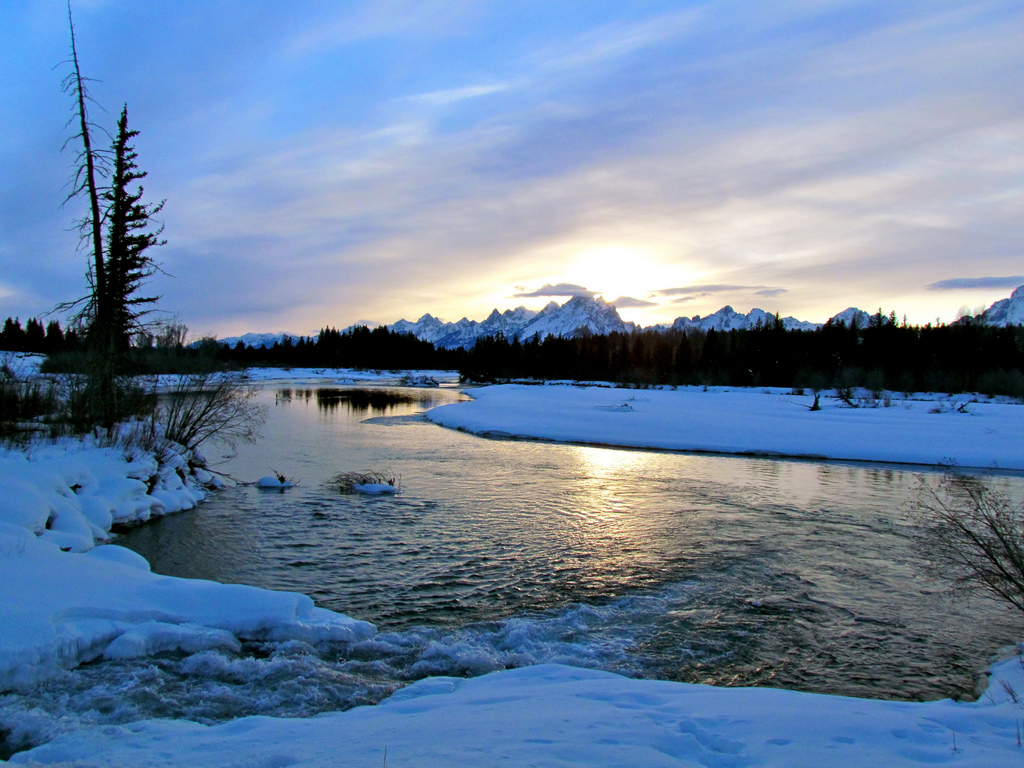 With a name like Glacier National Park, you would expect to see some icy wonders here. This national park gets its name the massive glaciers which shaped the land here ten thousand years ago. This distinct place allows scientists to studying those ancient processes as well as the impacts melting glaciers will have on our national parks. If you want to see it in person during winter, you will have to ski or snowshoe in, making it an excellent winter getaway. Weather can be very unpredictable, so visitors must come prepared for potential dangers. 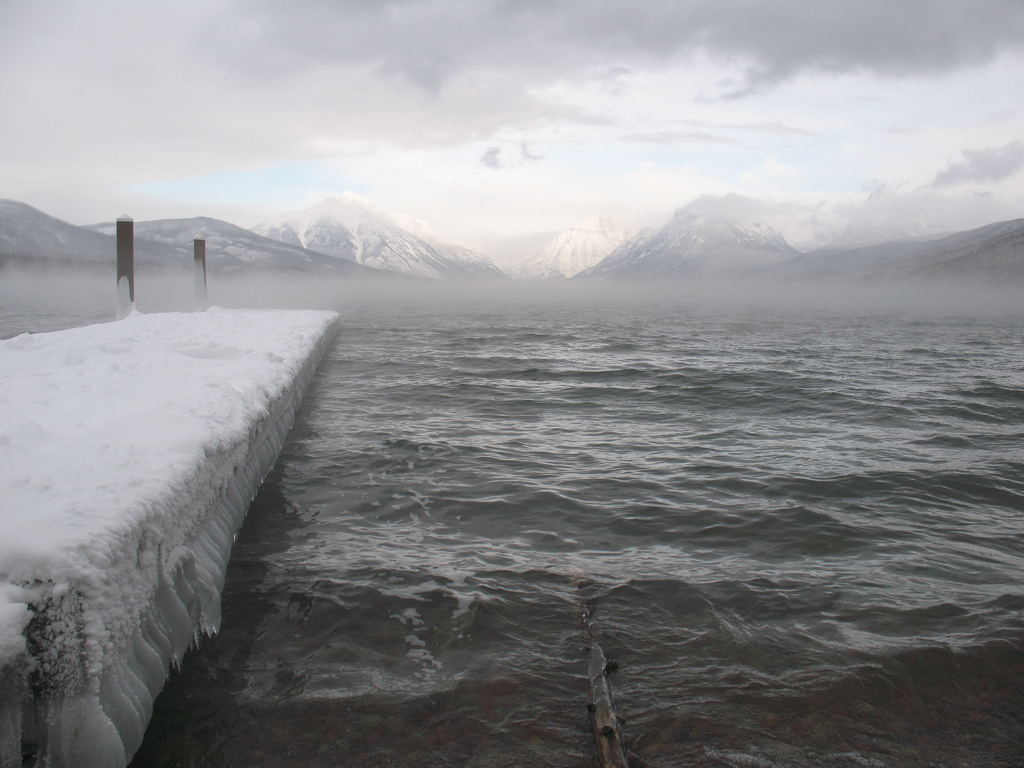 Winter defines Crater Lake National Park. High elevations and proximity to the Pacific Ocean create conditions for Crater Lake to receive over 44 feet of snow every year on average. Without this precipitation, the lake itself wouldn't exist. If you desire to discover this snowy wilderness, it's best not to drive, but it is a wonderful place for skiing and snowshoeing. Ranger-led interpretive hikes are offered every weekend. 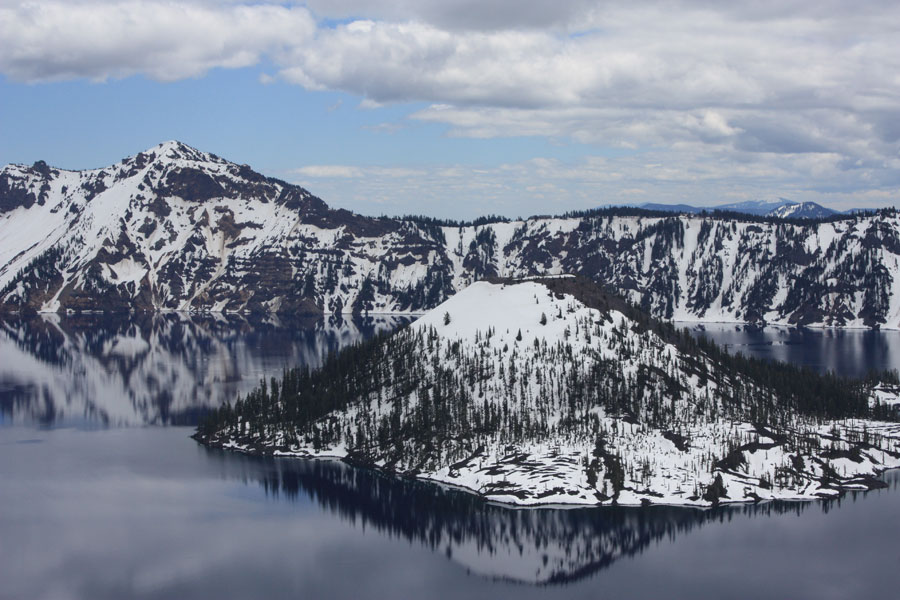 Shenandoah National Park's diverse elevations means it can receive rain, snow and ice in one day. Leafless trees and spacious skies create wide-open mountain vistas. If you want to go for a hike, hop onto the legendary Appalachian Trail for a stretch, but be aware that park facilities are closed. 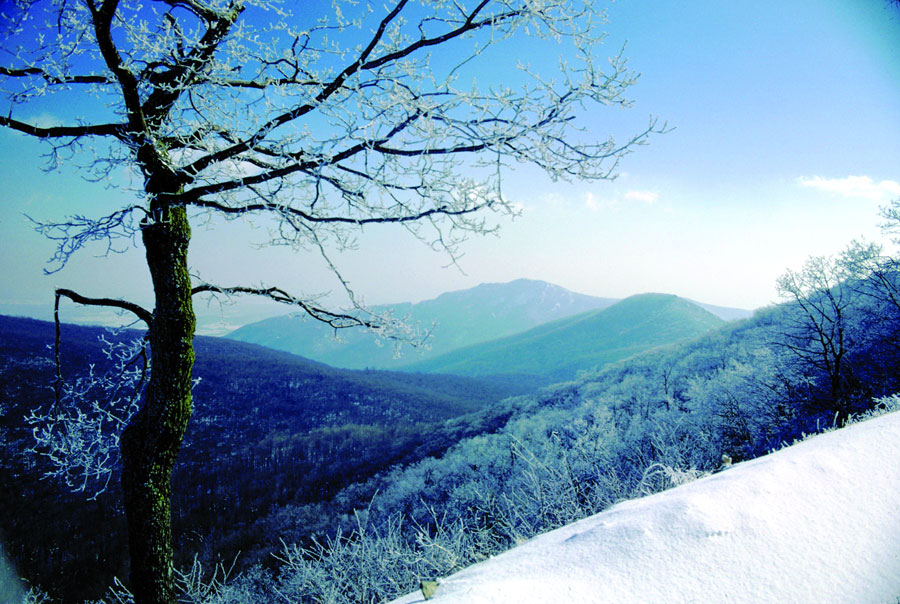 Olympic National Park has many diverse landscapes, all of which come alive in the wet season of winter. Drippy rain forests burst with rich greens, ocean beaches are dramatically plummeted by stormy waves and grandiose mountains tower with snowy peaks. Avalanches make visiting its peaks in winter fairly risky, although lower elevations remain relatively mild if you care to witness the splendor in person. 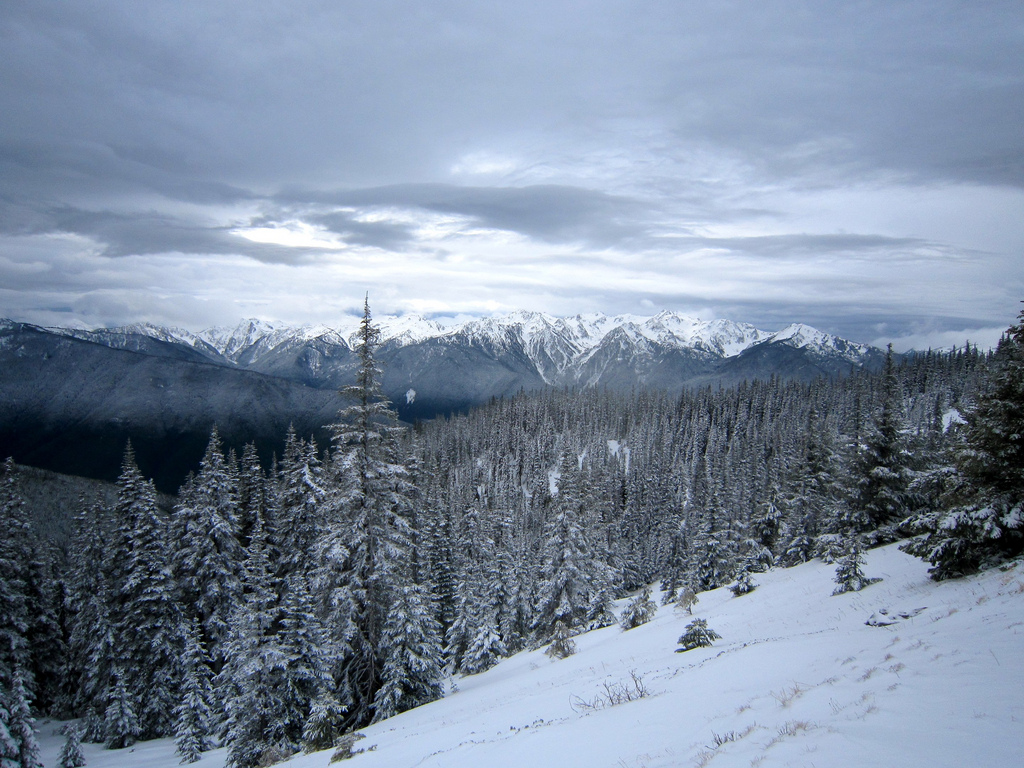 Evergreen trees receive special attention this time of year, and the Joshua Tree should be no exception. While snow isn't likely at the Joshua Tree National Park's lower elevations, its perfect stargazing skies reign supreme all year long. Winter temperatures can reach 60°F, making it the opportune time to visit the otherwise-sweltering Joshua Tree. 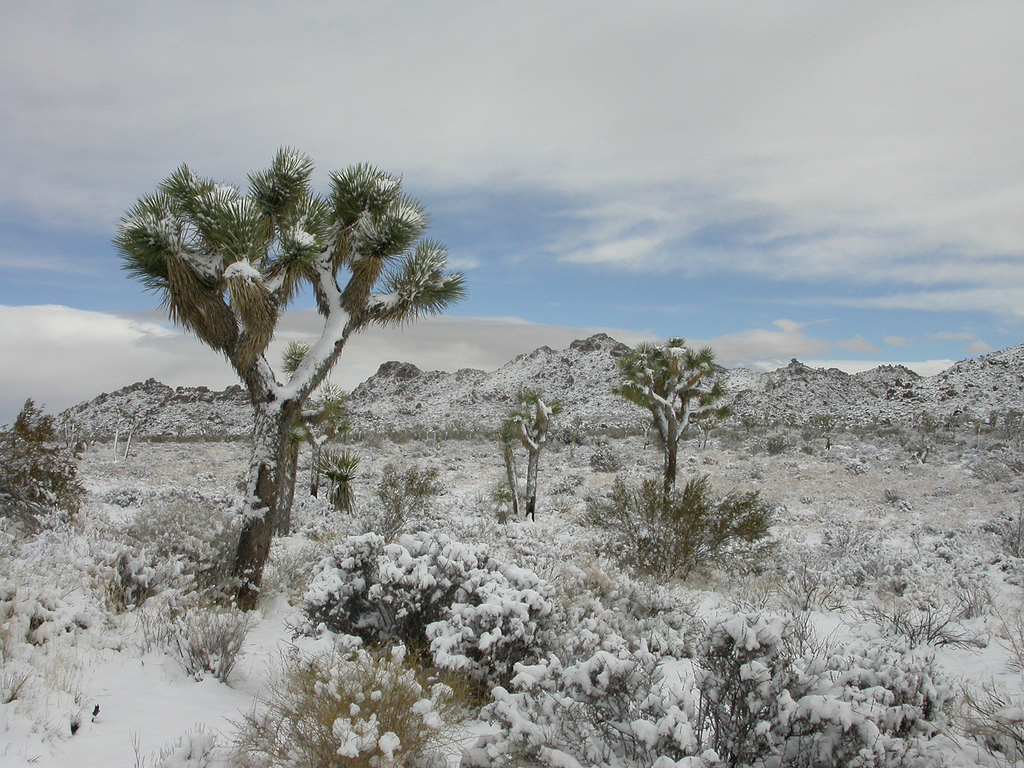 Skies are normally clear in this rugged wild place, offering dancing auroras at night. The photograph below may be your best bet for capturing the beauty of this park, however. The winter season is dark, very long and extremely cold - temperatures rise to only 5-7ºF during the day and fall to -50ºF at night. Hearty souls to choose to brave the elements anyhow will need to rely on dog sleds for transportation. 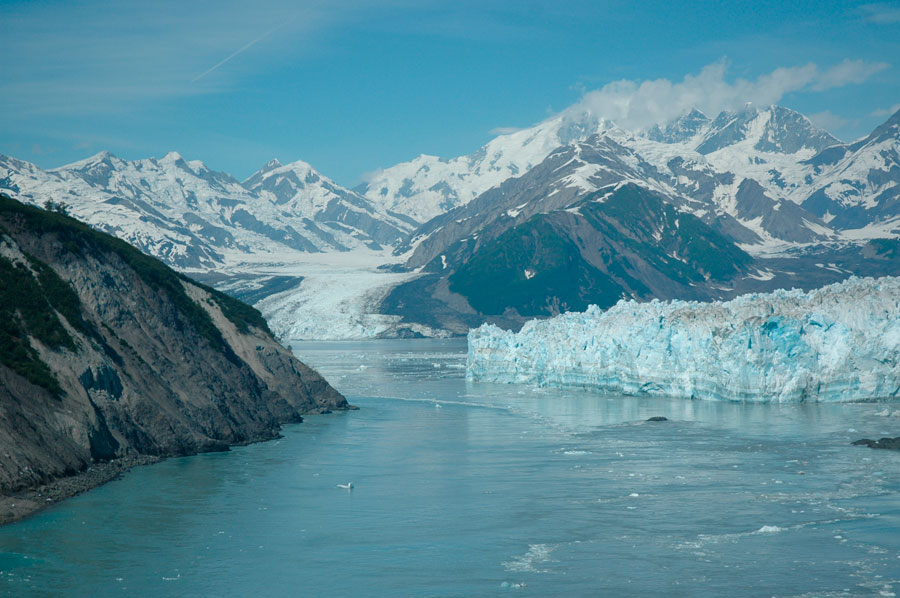 Known as the hottest place on the planet, Death Valley is certainly a winter park. The mountain peaks are snow capped, and the low angled winter light makes this wild land more beautiful. Occasional rainstorms are a seasonal treat for this area is also the driest on the continent. Most days are sunny, however, so this desert is prime location for solar energy development, which The Wilderness Society is working to keep out of the most sensitive wild lands. The stargazing here is legendary, so the park hosts several astronomical events during the cold months, including full moon festivals, star parties and Mars Fest in March. If you think you might visit, you will find it at its quietest between the end of November to the end of December, after which visitation peaks so reservations are recommended. You can take a peek online.