As the Ivanpah solar energy project goes online on Feb. 13, we reflect on lessons learned that will protect wildlands and advance clean energy.

Three large towers rise up from California’s Mojave Desert and cast long shadows like giant sundials. Beneath them, thousands of individual mirrors face upward toward the clear sky, radiating outward into geometric patterns that can only really be appreciated from an aerial view. At first glance, Ivanpah Solar Electric Generating System looks almost alien. 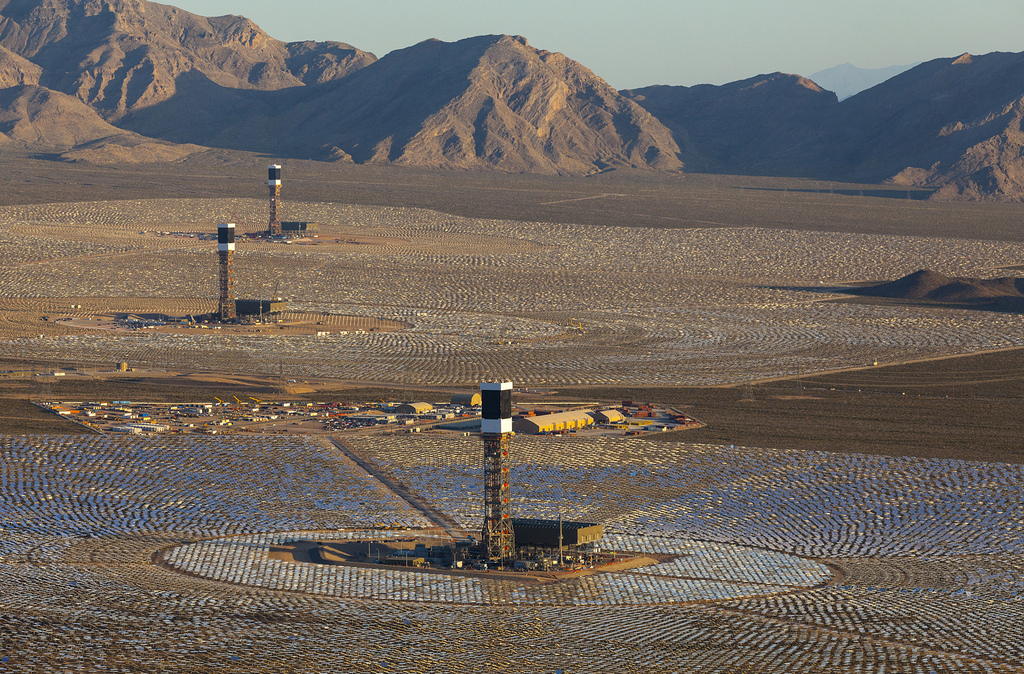 An aerial view of the Ivanpah Solar Power Facility at sunrise, where heliostat installation is nearly complete. Photo: BrightSource Energy

Observing the juxtaposition of the Ivanpah project—the world’s largest existing solar plant—and the barren beauty of the Mojave Desert takes some getting used to. This project, which is the first of its kind in terms of size, was part of a push from the Obama administration to expand our nation’s renewable energy sources in an effort to address climate change. It is one of the many projects of its scale that our nation will need to build in as we transition to cleaner sources of energy. The Ivanpah project, developed by BrightSource Energy and operated by NRG Energy, will produce reliable solar electricity to more than 140,000 homes throughout the western U.S.

"To many, this project represents forward progress toward a cleaner energy future. Others see a monument to human ingenuity and a pathway for regional economic development. For some, the project is a massive industrial facility sitting in the heart of a sensitive wildlife habitat and scenic desert views." 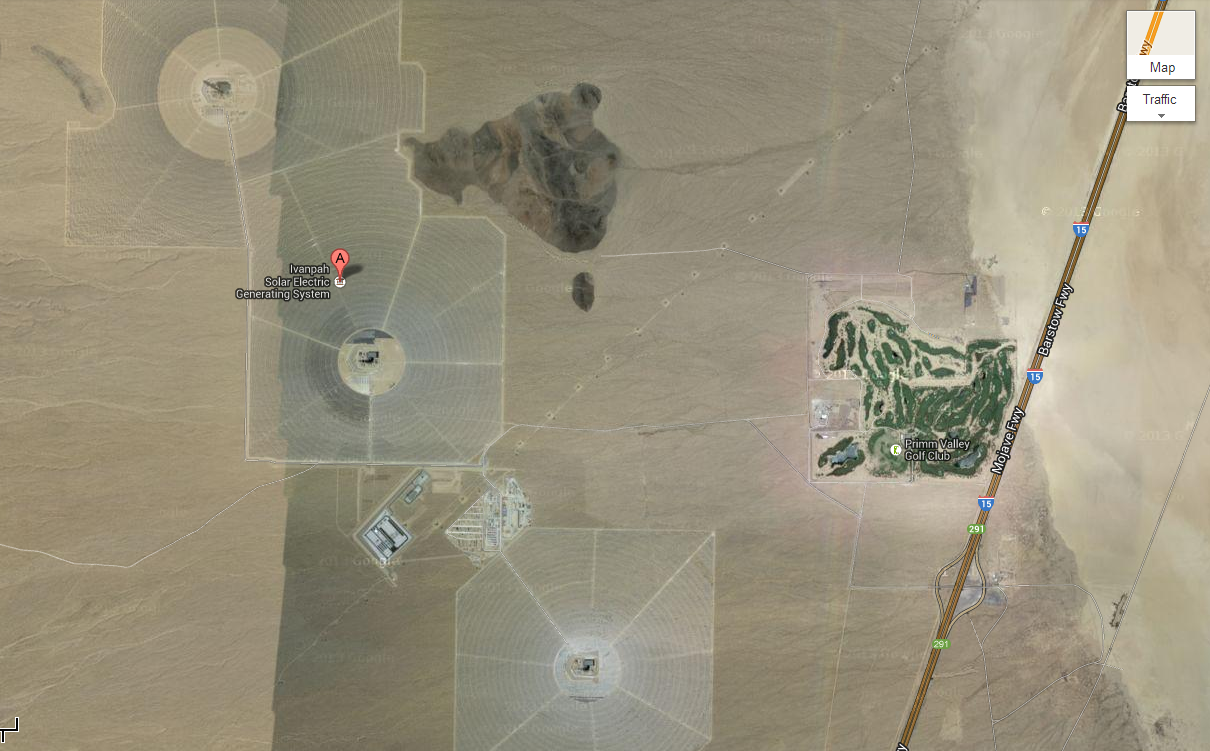 View of the Ivanpah project and adjacent 36-hole golf course as seen from Google Earth.

To many, this project represents forward progress toward a cleaner energy future. Others see a monument to human ingenuity and a pathway for regional economic development. For some, the project is a massive industrial facility sitting in the heart of a sensitive wildlife habitat and scenic desert views. 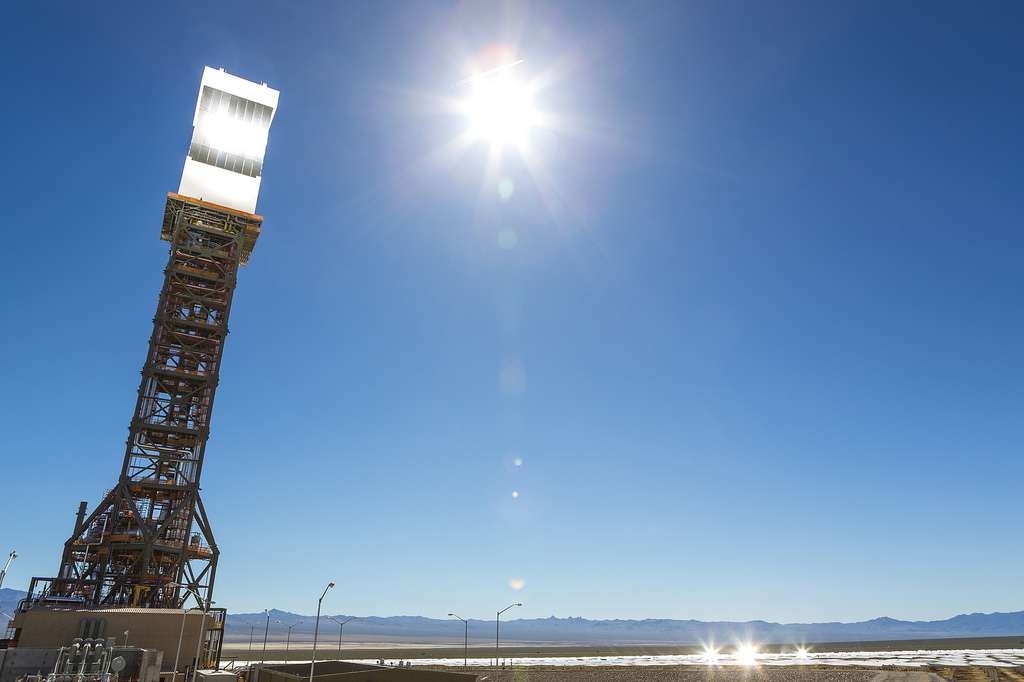 The top of Tower 1 is "lit" during a steam blow test at the Ivanpah Solar Power Facility. Photo: BrightSource Energy

Love it or hate it, there is one thing on which many can agree—there is a lot to be learned from this project. From the early stages of planning to today, we have learned important lessons about energy development that occurs on such a large scale.

Our insights will help to ensure that future development of renewable energy will be “smart from the start,” in that it avoids the controversy that has plagued other types of energy development on public land for decades. As a country, we have an enormous opportunity to ensure that our next generation of utility-scale power plants will be sited in a way that is sensitive to the lands they occupy, and with the greatest attention to respecting existing uses of the land, including being home to sensitive wildlife.

What we know for sure is that the greater California desert boasts world-class solar and wind resources and will continue to face pressure for development of renewable energy. But the desert is also home to a whole lot more than just energy potential. This diverse region hosts an extraordinary array of animal and plant species, cultural and historic treasures and boundless recreational opportunities. These values and renewable energy development conflict in some places. 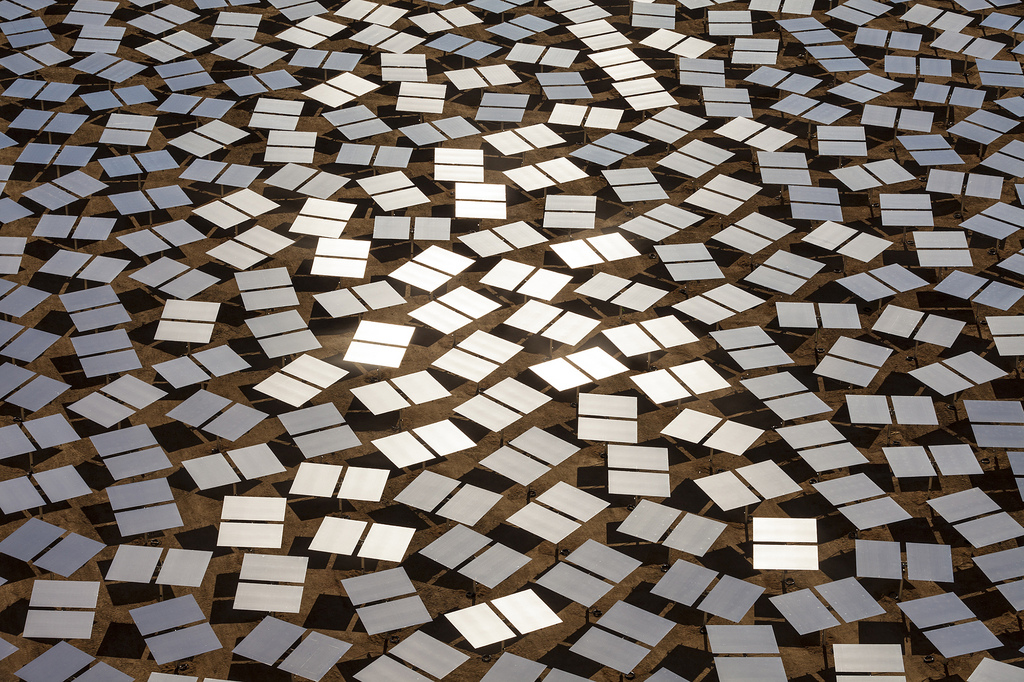 Heliostats, seen from the top of the tower, surround Tower 1 at the Ivanpah Solar Power Facility. Photo: BrightSource Energy

The Ivanpah project was proposed in one of those areas. There were initial concerns about the application, and  additional issues emerged as it wound through permitting and construction, some of which were not known when the project application was reviewed. Identifying and applying lessons learned from this experience will be important for protecting lands as well as ensuring the success of renewable energy in the future—several key lessons follow.

The Ivanpah project was proposed before the Bureau of Land Management had a plan for solar energy. Data on the abundance of desert tortoises on the site proved inadequate and significantly underestimated the project’s impacts on tortoise populations in the valley. This demonstrates the need to thoroughly pre-screen land to find suitable areas for development away from wildlife habitat. Having better long-term data about the lands and wildlife before a project area is identified or breaks ground will help prevent the type of conflicts that surfaced at Ivanpah.

The Ivanpah solar project, located next to the Mojave National Preserve, is in a largely undisturbed and remote valley. The building of Ivanpah created new transmission lines into the area, attracting other energy projects. There are now five projects in Ivanpah Valley—effectively a de facto solar zone. The broad footprint of all the projects combined presents a big disruption to previously intact wildland, but such challenges are not looked at as a whole when making decisions about where to permit projects. To minimize this cumulative impact in the future, development should be planned to ensure the region can sustain it and sited to capitalize on roads and transmission lines that already exist.

At Ivanpah, sunlight reflects off of mirrors to boilers atop 450-foot towers, creating a high temperature steam that turns a turbine and creates electricity. Solar projects are needed to generate this clean energy, but as with other large-scale projects, negative impacts to land and wildlife can still occur. Bird deaths have been documented at Ivanpah, for example. As we transition to clean energy, scientific research and monitoring at project sites is needed. What we learn could help prevent harm in the future. 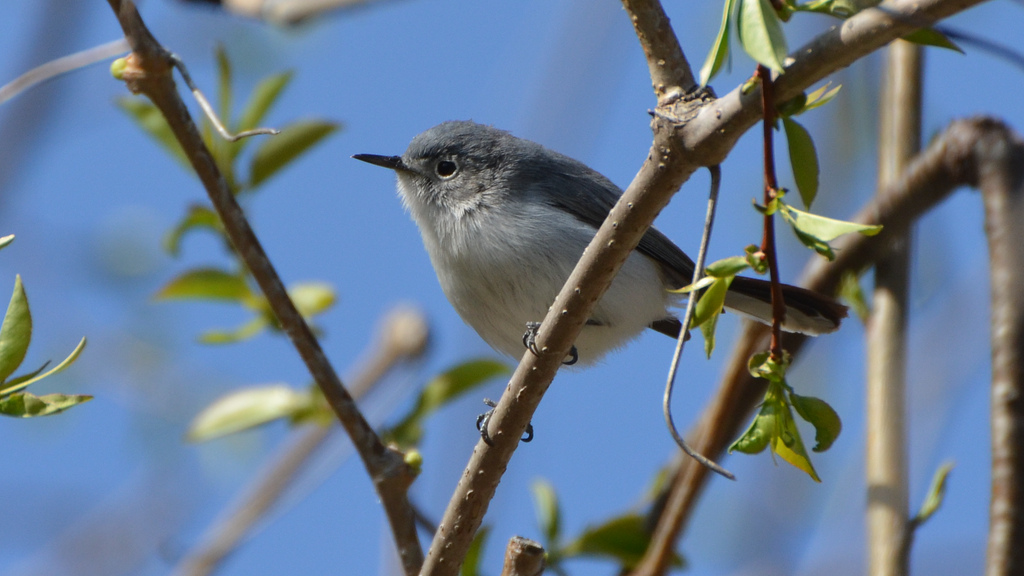 The blue-gray gnatchatcher, a small songbird and resident of the Mojave Desert, is one of the bird species whose range includes the Ivanpah project site. Photo: Wildreturn, Flickr

Lesson #4: Unavoidable impacts to the environment should be offset

Ivanpah’s developers have spent tens of millions of dollars to offset impacts to desert tortoises through purchasing and protecting land that includes tortoise habitat. These efforts will ultimately help young tortoises survive threats from disease and predators like ravens.  While these steps are important, a more pro-active approach will better address impacts. The Bureau of Land Management is working to improve the mitigation process as we move forward.  For future projects this would result in prioritized investments in conservation activities and wildlands based on regional plans, rather than the project-by-project approach used to-date. 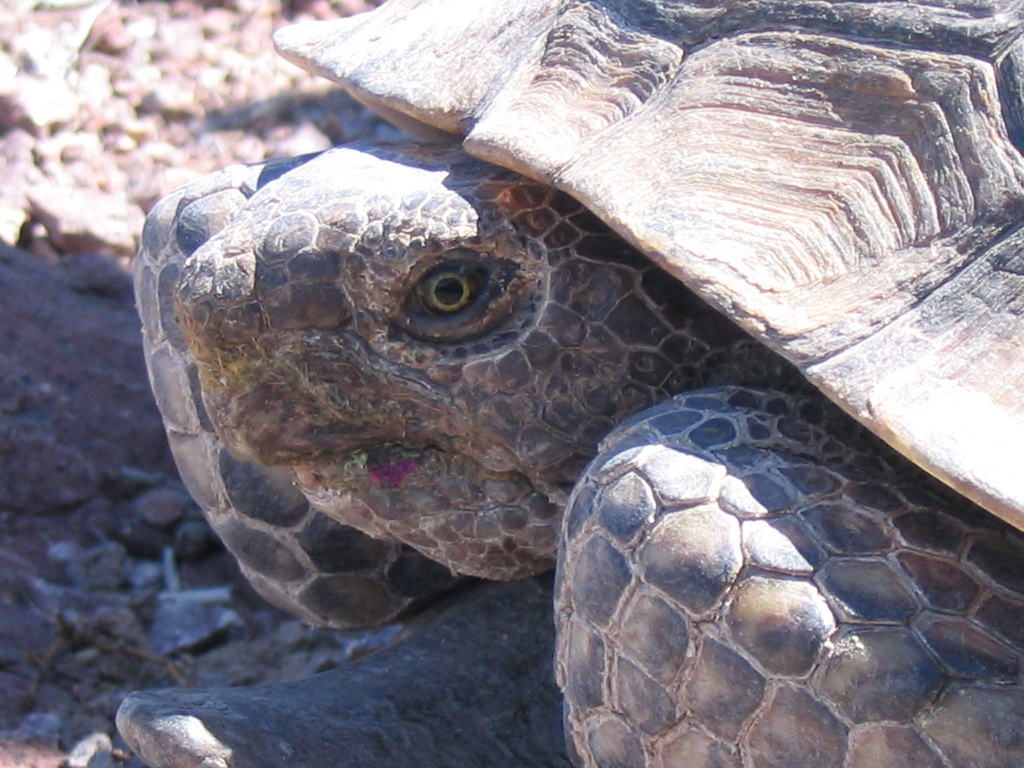 Desert tortoise are species of tortoise native to the Mojave Desert and Sonoran Desert of the southwestern U.S. Photo: U.S. Fish and Wildlife Service

Tomorrow’s clean energy industry will be built upon the lessons learned from projects like Ivanpah. Being truly “smart from the start” means working collectively, and with the best science and community input, to determine the best places for renewable energy as well as the lands that should be protected for other important values. Fortunately, there are solutions on the table.

The Desert Renewable Energy Conservation Plan (DRECP) is a great model for future projects. This plan is being developed by the BLM in California to identify low conflict places for renewable energy development in the desert.  The plan will ultimately determine which wild areas should be protected for future generations and which should be used for renewable energy. Processes like the DRECP are critical for meeting our clean energy needs while protecting our natural and cultural heritage.

The most important thing we can do to protect desert wildlands while advancing clean energy is to find the right places. Collaborative planning processes, community involvement and better science and research can help shape the future of the desert in a thoughtful way. 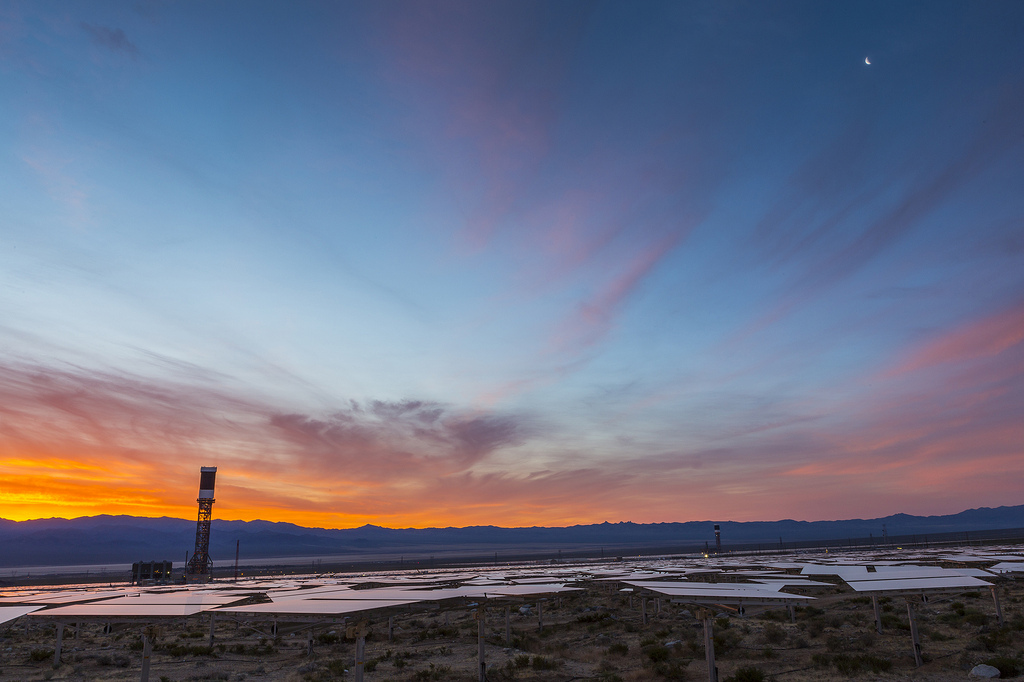 Tower 2 and its heliostats at sunrise at the Ivanpah Solar Power Facility. Photo: BrightSource Energy