A team of paleontologists has discovered an unusually rich cache of fossils on land President Trump stripped from Bears Ears National Monument, including relatively complete remains of reptiles hundreds of millions of years old.

The news was announced at the annual conference of the Western Association of Vertebrate Paleontologist (WAVP) by Rob Gay, a paleontologist who led the team as it uncovered the fossils over the last two summers. He said it was "extremely rare" to find such specimens—namely, intact skulls from the Triassic period—and suggested the tract where they were unearthed might yet yield new vertebrate species.

But at the moment, that potential is in jeopardy. In late 2017, as some of the unearthed fossils were being analyzed by researchers, Trump made his legally dubious decision to shrink Bears Ears by 85 percent, putting the fossil bed outside of the monument-protected area and threatening the dig's funding. Most troubling, the land where the fossils were discovered was suddenly open to mineral mining claims. 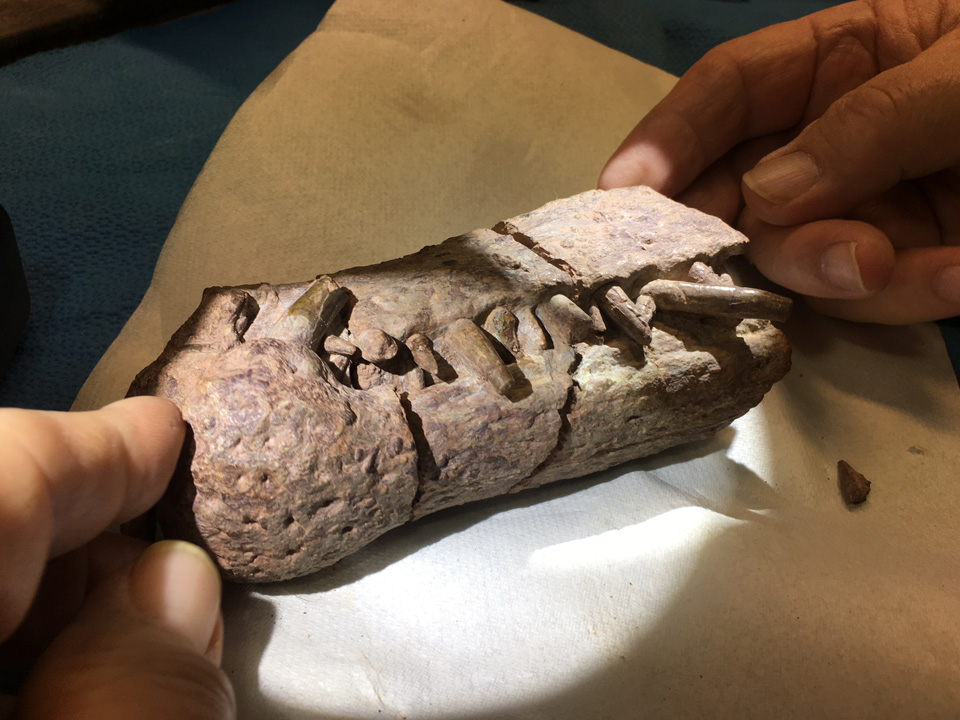 A phytosaur fossil unearthed by Rob Gay and his team.

Highlighting some of the dangers facing such fossil sites absent monument status, Gay's team uncovered one specimen that bore telltale signs of looting. The missing fragment—a skull shard—was taken by a collector with no permit. Though the piece was eventually recovered, the episode illustrated how vulnerable new discoveries are to bad behavior. Vandalism and looting are already a huge problem at some national monuments and would be even more so for tracts of land that lack that level of staff and resources.

Fossil-rich land in both Bears Ears and Grand Staircase-Escalante

Gay's team's recent excavations uncovered crocodile-like reptiles called phytosaurs that proliferated in Utah and other western states. While the fossil record of such animals is extensive, the unusually whole nature of the Bears Ears specimens helps show the area's paleontological potential. When the monument was first designated, Gay told the online outlet Science Insider that the area preserves a geological moment when dinosaurs went from an up-and-coming presence to dominant lifeform, the transition between the Triassic and Jurassic periods. Indeed, Trump's cuts stripped protected status from a major Triassic bone bed, among other sites.

More is known about the paleontological possibilities in Grand Staircase-Escalante, the other Trump-excised monument, so we can better gauge how much is at risk. In 2013, a new dinosaur species thought to be a close ancestor of Tyrannosaurus rex was unearthed there, a major find and one of at least 25 unique dinosaur species discovered in the monument. By one account, the Grand Staircase-Escalante’s tallest plateau, the Kaiparowits, could contain the world's "best and most continuous record" of terrestrial life in the Late Cretaceous, a period that included crowd-pleasing beasts like Tyrannosaurus, Triceratops, the heavily armored Ankylosaurus and the dome-headed Pachycephalosaurus. 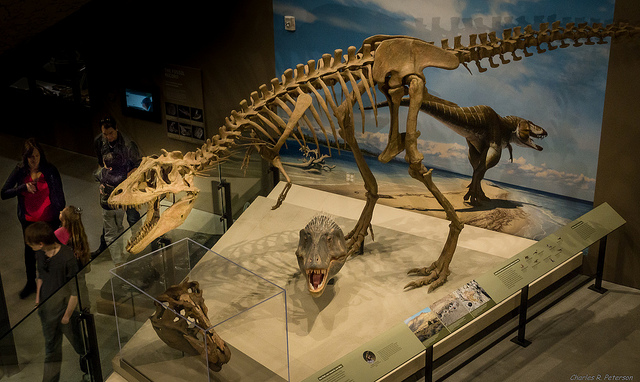 There are estimated to be more than 3,000 "scientifically important" fossil sites in the full Grand Staircase-Escalante National Monument, and Trump's cuts left out more than 400 of them, including many potential dinosaur finds and a large section of Triassic petrified forest mentioned in President Bill Clinton's original proclamation establishing the monument.

Such irreplaceable resources will be imperiled as a result of Trump's actions, and so will the body of academic work they support. The monument cuts will interfere with research and perhaps even halt some projects entirely (a great deal of funding that led to major fossil finds in Grand Staircase-Escalante came through the monument, including the resources to airlift a rare, nearly complete tyrannosaur skeleton out of a now de-designated monument area in 2017). Funding for Bears Ears is in limbo because the land where Gay is digging is no longer part of the National Landscape Conservation System, meaning it will likely no longer qualify for its original Bureau of Land Management grant.

Monuments broadly under threat, and so are fossil finds

While the two Utah monuments have become the most visible examples of lands falling victim to the Trump/Zinke school of natural resource management, the rollbacks were just one episode of a long-running and increasingly successful operation to un-protect monument lands and neuter the law that established them, the Antiquities Act.

The National Park Service alone presides over more than 200 sites with “documented paleontological resources,” and many of those units were originally protected under the Antiquities Act. Likely the best example of such landscapes is Colorado and Utah's Dinosaur National Monument, which has been a prolific source of fossils for more than a century. Dinosaur encompasses a major chunk of the Morrison formation, an expansive sedimentary rock unit that is considered the most productive source of near-complete dinosaur skeletons in North America. 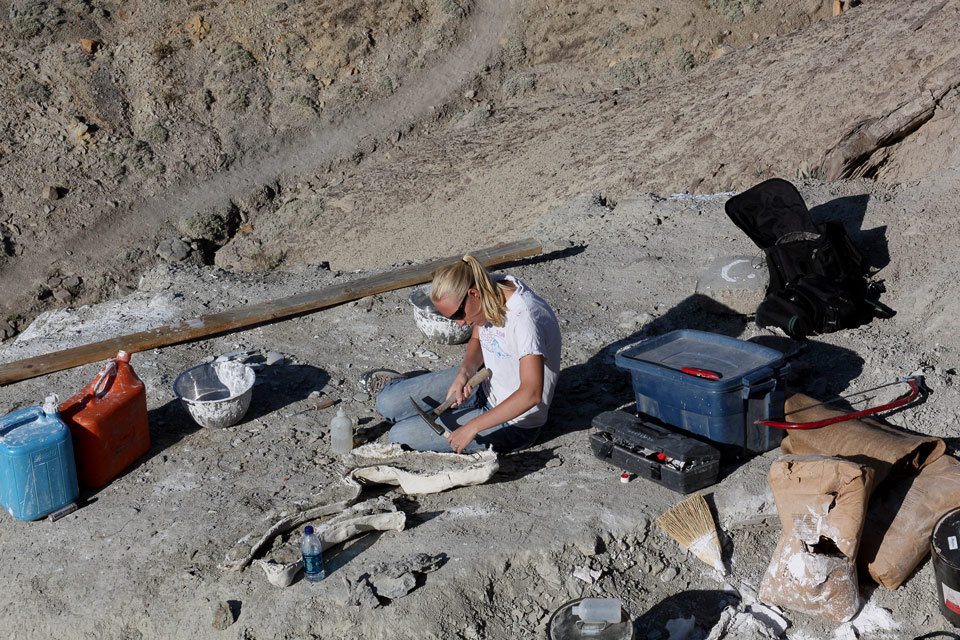 Paleontology field work at Dinosaur National Monument, which has been a key fossil resource for over a century. Credit: National Park Service.

In declaring the monument in 1915, President Woodrow Wilson specified that for the public interest, the fossil deposits should be protected along with "as much land as may be needed." While the latter idea is consistent with decades of presidential practice and has been upheld by a number of legal decisions, it is still regularly attacked by fringe politicians who want to restrict monument status to tiny patches amid development and privately owned land.

Speaking to the journal Science late last year, the president of the Society of Vertebrate Paleontology expressed concern about the precedent-setting damage Trump's decision might do to the institution of national monuments, and therefore to fossils: "If a new president doesn't care about those things, he can just change the rules and doesn’t have to protect them anymore."

In defending the institution of the national monument—and of national public lands protection more broadly—we hope to ensure that people like Gay can continue to move science forward and inspire the next generation of dinosaur-beguiled children, no matter how many legislative or presidential obstacles are tossed in our path.

As a Department of the Interior paleontologist told the Los Angeles Times last year about digging in Grand Staircase-Escalante, “for the scientist, there’s no greater thrill than to get out and find things that you know are going to push the boundaries of human knowledge." Along with safeguarding wildlands and cultural sites for future generations, it is our duty to help keep those thrills coming.