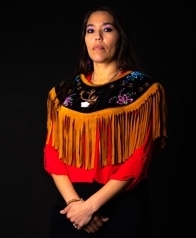 This essay was written by Bernadette Demientieff, executive director of the Gwich’in Steering Committee and a tireless defender of the Arctic National Wildlife Refuge. Demientieff is a proud, powerful representative of her people who works to build support for protecting the birthplace of the Porcupine Caribou Herd and the human rights of the Arctic’s Indigenous peoples. The Wilderness Society is proud to stand with her as partners in defense of the Arctic Refuge and those who depend on it to sustain their families, communities and cultures.

On January 6, 2021, the Trump administration committed an act of cultural genocide against Indigenous peoples in northeastern Alaska and western Canada by selling oil and gas leases on sacred land that has fed our families for millennia—the coastal plain of the Arctic National Wildlife Refuge. President Biden has temporarily suspended those leases, but the long-term threat remains.

America’s six largest banks and now 17 insurers have promised to not finance or insure oil development in the Arctic Refuge but Liberty Mutual—which signed the United Nations-supported Principles for Responsible Investment less than a month before the lease sale—is not among them. The company has refused to meet with communities impacted by the fossil-fuel development projects it insures, and it has worked to silence related questions and comments at its annual policyholder meetings.

Known to the Gwich’in people as as “Iizhik Gwats’an Gwandaii Goodlit” (the Sacred Place Where Life Begins), the coastal plain is a 1.5 million-acre strip of land at the edge of the Arctic Ocean, and is the calving ground of the Porcupine Caribou Herd. We are spiritually and culturally connected to our caribou, and they are our main source of our food in communities that are hundreds of miles from any road. The land is our grocery store.

Caribou are the foundation of our songs, stories and dances, and the basis of our identity and spirituality, culture and way of life. Our identity is non-negotiable and our culture is not for sale.

In August 2021, the United Nations called for an investigation into the United States regarding violations of our human rights from proposed development. Public and corporate opposition is growing. Business leaders see that Arctic Refuge drilling is wrong for people, animals, our climate and the environment. Nearly 70 percent of Americans oppose drilling there.

More than 300 companies recently spoke out against the drilling plans. The six largest banks in America have announced they will not finance development projects there, as have the five largest banks in Canada. Seventeen international insurance companies, including AXA and Swiss Re, have vowed to not insure such projects.

A Dec. 10, 2020, letter to the Gwich’in Steering Committee states that Swiss Re doesn’t support projects that damage sensitive places such as UNESCO World Heritage Sites or lands protected by the Ramsar Convention or the International Union of Conservation for Nature and, “Furthermore, we do not associate ourselves with projects that violate the right of indigenous peoples.”

Now it is time to follow words with actions. I call on Liberty Mutual to state publicly that it will respect the rights of Indigenous people in Alaska and Canada by refusing to support Arctic Refuge drilling.

As directed by my Elders and on behalf of the Gwich’in Nation of Alaska and Canada, I ask Liberty Mutual to reject the destruction of our sacred lands. The Gwich’in speak not only for ourselves, but for the animals negatively impacted by climate change. We use our voice for future generations and all people around the world. Because what happens in the Arctic will find its way to your home.

Countless lives have been and will be affected globally unless we unite against corporate greed. We will not sit by while people come into our homelands and make decisions about our future without consulting us. We must live with the destruction you cause, and our children will suffer because of your greed. Any company that supports drilling in the Arctic Refuge will answer to the Gwich’in Nation and our millions of allies.

The Gwich’in Nation of Alaska and Canada speak with one voice to protect our sacred lands, our spirituality and our way of life. We will stand up against anyone who seeks to destroy them. We ask Liberty Mutual to join us.

*Bernadette Demientieff, executive director of the Gwich’in Steering Committee, is Gwichyaa Zhee Gwich’in. She sits on the Advisory Board for NDN Collective, Native Movement AK and the Episcopal Church’s Task Force on Creation Care and Environmental Racism.