The banks are starting to listen. Now we need permanent protections.

Your efforts to save the Arctic National Wildlife Refuge are paying off. Illustrating the power of activism and pressure from Indigenous activists, conservation organizations, the public and their customers, five of the United States’ six largest banks have announced they will no longer finance oil drilling in the Arctic Refuge!

Gwich’in and Inupiat Indigenous activists have worked tirelessly to protect the Arctic Refuge’s coastal plain, which is the calving ground of the Porcupine Caribou Herd and sacred to Alaska’s Gwich’in people, who depend on the herd to sustain their communities.

“For years, we have been speaking out about the need to keep drill rigs out of our sacred lands in the Arctic Refuge, and it’s amazing that a growing number of major banks are listening,” said Gwich’in Steering Committee Executive Director Bernadette Demientieff said in a March media statement.

“The Arctic Refuge is critical to our people’s food security and way of life. Our human rights will not be dismissed,” she said.

At 19.3 million acres, the Arctic Refuge is our largest wildlife refuge and provides habitat for caribou, polar bears and migrating birds from across the globe.

Banks from around the globe, representing trillions of dollars in assets, have heard the message—sacred Indigenous lands, irreplaceable lands and our global climate must be protected.

It is time for our national representatives to listen to the people and permanently protect the Arctic Refuge. 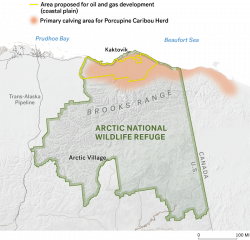 The footprint of development is much bigger than you might think.