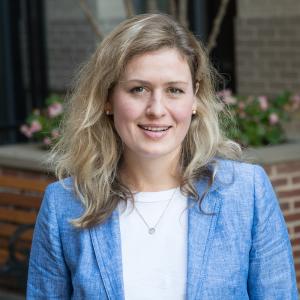 Liese Dart is the Eastern Region Philanthropy Officer and Strategic Advisor, Energy & Climate Program. She has worked closely with TWS president Jamie Williams in a supporting role since March 2013. Liese Dart joined The Wilderness Society in January 2011 as a Wildlife and Clean Energy Policy Advisor. In that role she focused on putting policies in place to support energy efficiency and smart renewable energy on public lands.

Prior to joining The Wilderness Society, Liese worked for a leading regional land conservation organization, the Piedmont Environmental Council (PEC), based in Virginia. At PEC, Liese covered siting and policy issues regarding our nation’s electricity infrastructure on Capitol Hill and in the Virginia General Assembly.

Liese grew up in the foothills of the Blue Ridge Mountains, her favorite place. In her spare time she enjoys travel, cooking, gardening, and being outside.